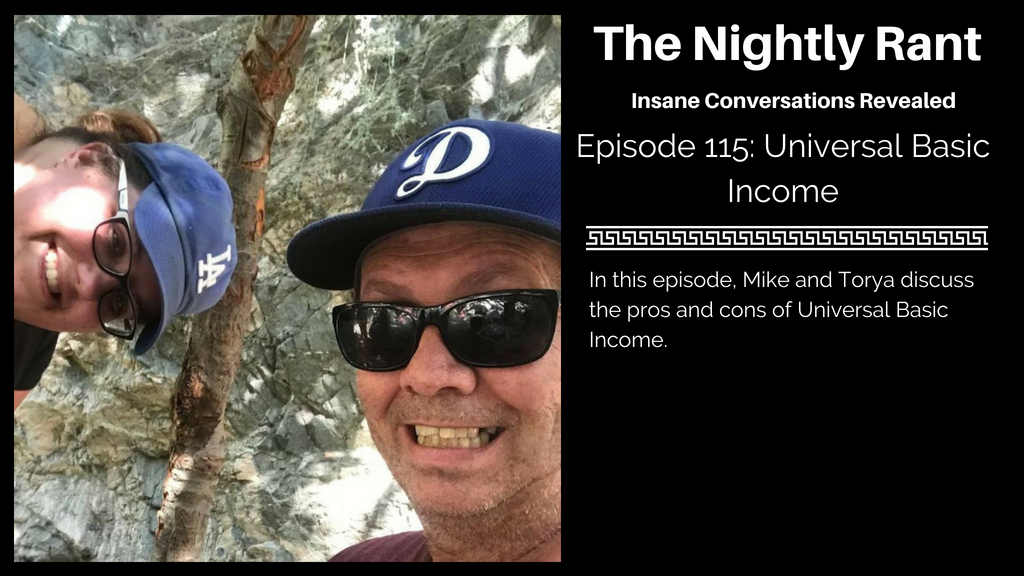 In this episode, Mike and Torya discuss community issues and foster animals.

Listen to The Nightly Rant Episode 115

They begin discussing many different ways where Universal Basic Income would be a huge help to society. It would help to eliminate homelessness. It would enable everyone to survive wherever they live. Mike points out that it is a welfare system individualized to each person.

Universal Basic Income is something that would help control welfare abuses. Each person would have their own account. That would mean nobody could claim their dog as a dependent.

Torya uses Canadian healthcare as an example of how Universal Basic Income could be handled state by state here in the United States.

Mike gives examples of how people cheat the welfare system. By tying it to the individual it would combat that completely.

Torya discusses how the government typically handles broken systems. They don’t fix what is broken, they band-aid it. She says they should throw it out and start over if it is broken. Mike links that to lazy programmers who throw out working code and rewrite it to add new features.

Torya gives an example to support her idea–a vehicle that is in a fire. It can’t be fixed. Mike presses her for a government program that is broken and should be thrown away and redone. Torya lists welfare and Medicare as systems that need to be fixed. She then brings up gun laws and drug laws.

Mike wonders how people get away with welfare fraud these days because everything is computerized. He reinforces that Universal Basic Income would fix the issue permanently. Housing costs would be reduced because even landlords would have a Universal Basic Income. He explains his idea to transition people from supportive help on the public dime to supportive help in the private sector.