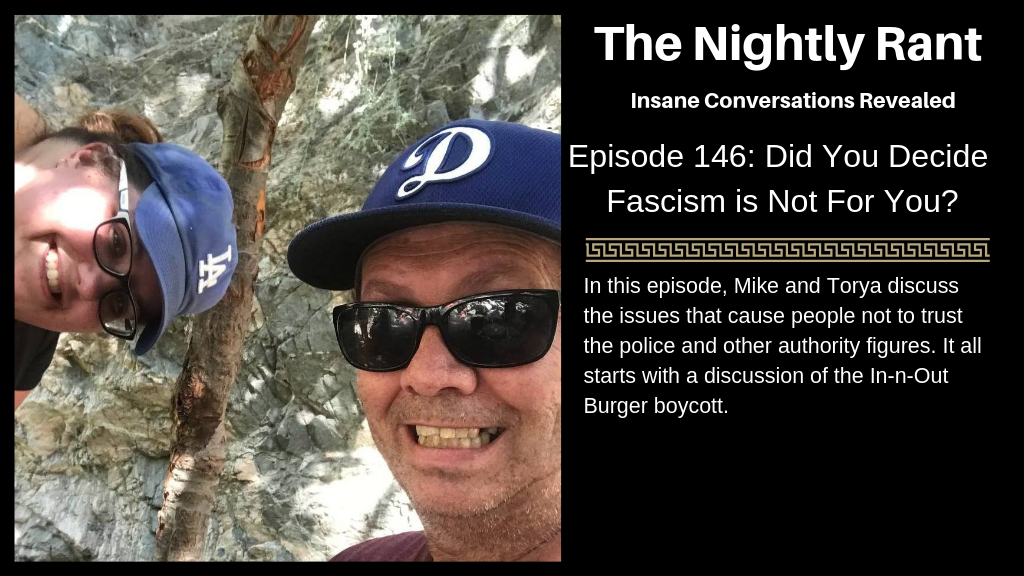 In this episode, Mike and Torya discuss the issues that cause people not to trust the police and other authority figures. It all starts with a discussion of the In-n-Out Burger boycott.

Listen to The Nightly Rant Episode 146

Mike opens the episode with a story about the two dogs barking at the front door. This leads to a discussion about what is considered reasonable. Torya thinks the manager is telling people the parking rules when they move in and that is helping alleviate the problems they’ve been having. Mike gets extremely confused by Torya’s logic. She explains further and it gets cleared up.

They then discuss how they feel about the word “boycott” and explain why they feel that way. Mike wants to know what specifically about the word bothers Torya. This leads to a discussion of In-n-Out Burger and the boycott Democrats are demanding. They demand this because In-n-Out Burger donated money to the California Republican Party. Mike points out that they also donated to the California Democrat Party as well. Why boycott them for donating to both places?

Mike says this is an example of how people create narratives and then push them on us.

Mike and Torya give listeners insight into how the topics for each episode are chosen.

Torya is angry that people want to guilt others into doing things their way. She says discuss issues and let people decide what to do. She says boycotts are historically started by fringe elements and she likes to live in the middle. This leads to a discussion of probable cause for the police to stop a driver. Torya sees no issues, but Mike gives examples of where problems can arise. Mike says you can’t give in on things because the line will keep moving. Somehow they begin discussing what would happen if people walked around naked.

Mike says that Torya’s attitude causes a problem. When you believe things are OK until a problem is proven, they allow the problem to happen.

Torya points out that she comes from Canada and she trusts law enforcement. People in the United States do not trust law enforcement. He still says that corruption can occur and you must have rules in place to avoid that corruption. This leads to a nice discussion about trusting the police.  They decide this all has to do with your experience.

Torya describes her experience with the police and why she trusts them as a result. Mike has different experiences.

Mike rants about how important it is to understand how other people think.