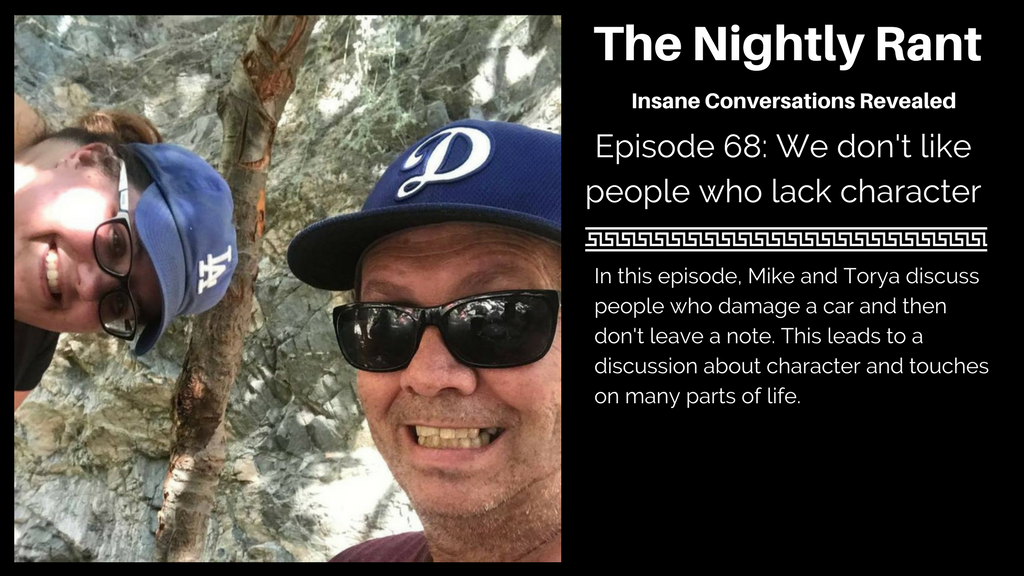 In this episode, Mike and Torya discuss people who damage a car and then don’t leave a note. This leads to a discussion about character and touches on many parts of life.

Listen to The Nightly Rant Episode 68

In this episode, Mike and Torya discuss people who damage a car and then don’t leave a note. This leads to a discussion about character and touches on many parts of life.

Mike tells us that these days everything is just a blur. He then discusses the impending election activities. It is both stressful and exciting.

Mike recaps their visit to Petco to purchase a new hermit crab for the zoo. Apparently hermit crabs can’t be alone or they die from loneliness. While leaving Petco Mike noticed that at some point someone hit the passenger side mirror on his car and cracked the case for the mirror. They didn’t leave a note.

The discussion turns to how people who do this type of thing lack character. Character is who you are when nobody is looking. That’s how Mike concludes these people lack character.

Mike discusses having to collect signatures to get on the ballot. He describes what a mess the voter data is.

Mike wonders if this is the biggest battle of the entire campaign–collecting the signatures. He then discusses the articles about the supervisors that Torya provided. The discussion centers around the other groups dealing with homelessness and how they’ve come into being. This prompts MIke to explain that the money is being splintered apart as a result and this leads to less getting done.

Mike then explains the situation in which Todd Spitzer made a citizen’s arrest. This leads to a discussion of the shadow government.

Mike and Torya then discuss how to entice the incumbent into a debate.

The Board of Supervisors has been called lacking in integrity and vision for quite some time now. They do whatever they want because they think they are all powerful. Mike makes the David vs. Goliath reference in regards to his campaign.