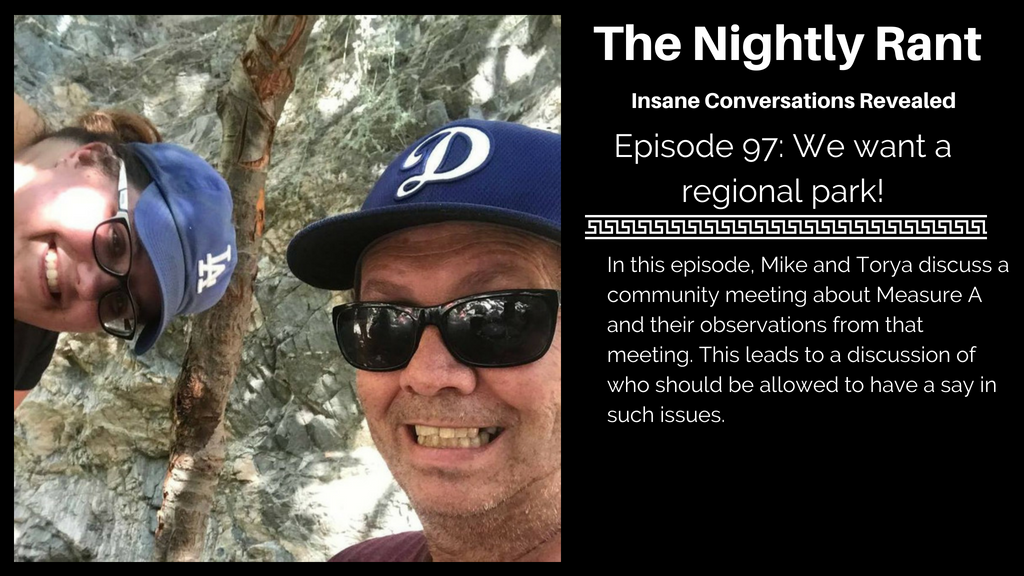 In this episode, Mike and Torya discuss a community meeting about Measure A and their observations from that meeting. This leads to a discussion of who should be allowed to have a say in such issues.

Listen to The Nightly Rant Episode 97

Mike opens the show sounding frustrated. They just returned from a community meeting regarding Measure A and the race track property.

Torya says people were so dumb that she doesn't think she has any brain cells left.

Mike says most of the people were respectful, but many of them were not at all polite. He mentions the development committee chairman from the other city who is busily approving extremely high density housing in his city, but feels he should come lecture their city about what they should or should not develop.

Torya mentions how she told the guy to be quiet when he was sassing the speaker. Mike points out that the guy was thinking about saying something back, but he thought better of it.

Torya noticed he was outside with his posse when they were leaving and she made another sassy comment. He didn't reply at all.

Torya claims these people don't want more people in their city because people who are not retirement age would be able to make decisions for the city and they won't get their way and she doesn't think they can handle not getting their way.

Torya believes people from other cities should not have a say in the matters that affect other cities.

Mike says that if the ability to speak out exists, people should exercise that right. He says that prioritizing speaking time by those who are citizens of that city first and all others later makes sense to him.

Torya agrees that those people who live in a city should have top priority at all council meetings. Others should not have the same priority as the citizens of the city do.

Torya feels like the comments people make at these meetings are just repetitive.

Mike interjects by saying he saw a Gavin Newsom commercial. He describes the commercial. He says Newsom is gesturing like he is God. Mike does see his charisma, but he doesn't care for Newsom at all, especially his political positions.

Torya points out that the presenter and a guy at the back of the room used to be on the same side of the issue. The obnoxious guy has lame arguments that somehow people listen to.

Mike points out that the presenter held his ground the last time a measure was on the ballot because he didn't think it was good for the city. Now, with some slight changes, he supports the measure because he feels the changes made are extremely positive.

Torya remembers him saying the last measure was 80% good.

Mike points out that this guy thinks he owns a share of the race track land because he is a tax payer. He claims it is equity owed to the public, yet this is private property.

Torya supports the idea that the land is private property.

The Number 3 Episode of The Nightly Rant

Torya's number 3 favorite episode of The Nightly Rant is TNR54-Tide Pods are Yummy. She says she loves this one because it was iconic. She started asking people to send her rude emails and she will send them a tide pod sticker.

Mike's number 3 favorite episode of The Nightly Rant is TNR73-The Return of the Pope of All Websites. He says it is his favorite because the Pope tried to be stealthy and smart, but was neither stealthy or smart. Torya guarantees that there will be more drama with the Pope of All Websites. Mike agrees. He says he sent the Pope all his files and the Pope doesn't seem to know what to do with those. Torya points out that as someone who knows nothing about websites that she could restore the sites using a Google search. Mike completely agrees.

Mike once again describes how all the drama began.