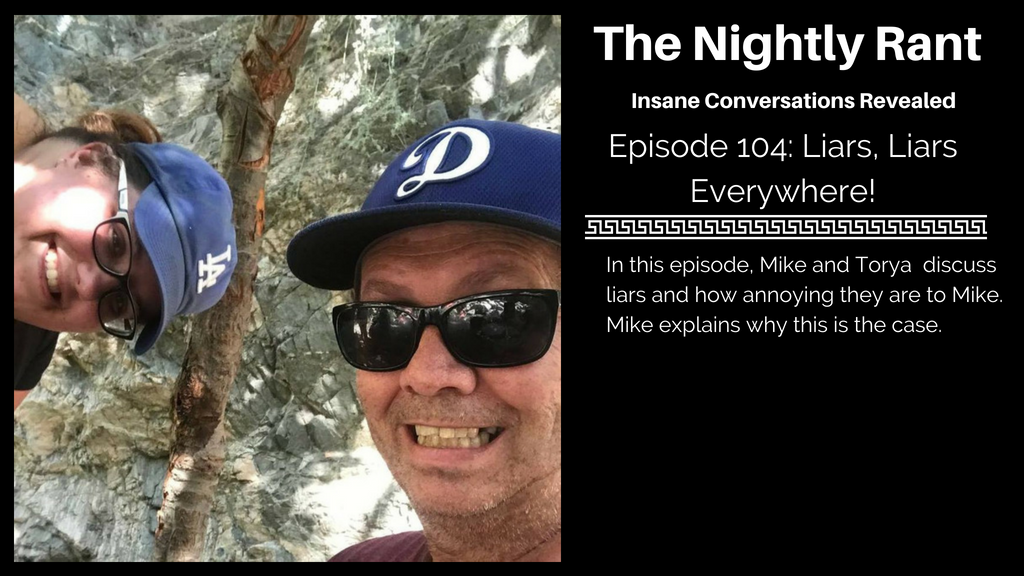 In this episode, Mike and Torya  discuss liars and how annoying they are to Mike. Mike explains why this is the case.

Listen to The Nightly Rant Episode 104

Look out world! Mike is on fire tonight and ready to rant. This is a rant of epic proportions!

Torya says they’ve encountered a lot of liars of late. Mike says that he won’t address specifics, but he will be pointing out why he hates being lied about. He says he is often accused of not being able to let go of a situation. He says that it really concerned him that this latest situation with the crazy woman is something he couldn’t let go. He analyzed his response and figured out that when someone accuses him of something that is so far removed from anything he would do, he feels the need to disavow himself from the situation.

Torya says the more details you give a crazy person, the more lies they will come up with. Mike says being totally general is the best approach and makes it hard to make up stories.

Thus, Mike has concluded that he doesn’t like when someone accuses him of things that he would never do morally or ethically. He just can’t seem to let that sit.

They then discuss the Vegas Golden Knights and how they lost the Stanley Cup Finals in 5 games to the Washington Capitals.

Mike explains that he is definitely transparent, but he keeps his circle of friends small because it causes so much less drama. They then discuss how a situation can be detailed or vague, but still be truthful and honest.

Mike says that if someone accuses you of stealing money, you will vehemently defend yourself. Torya points out some past accusations and how patently false they were.

Mike says this crazy person came into the discussion with their spin already painted. They then built a narrative to fit that. In other words, they defined Mike first and then crafted their argument to support the narrative they created about him.

Torya describes a situation where she was called a bully and she proved she was not. Liars tend to want to keep up their lies.

Torya points out that whenever they have a guest their names rhyme.

They then discuss a problem they have been having with their iPhones where they cannot turn on or off caller ID. Apparently it is a system-wide problem and not isolated to their phones.

The discussion leads to campaign donations and what happens with leftover money if it isn’t moved to a new campaign.