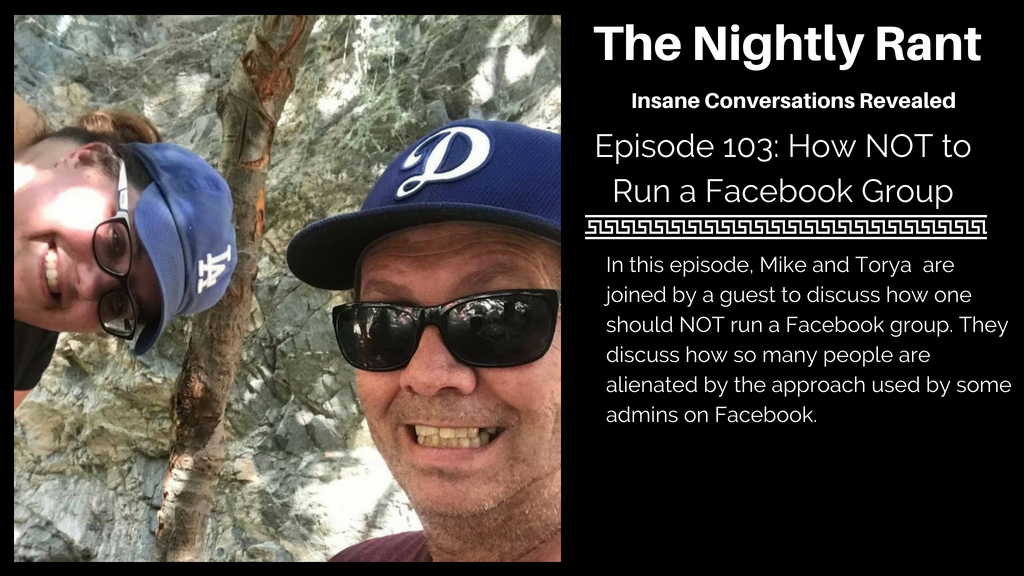 In this episode, Mike and Torya  are joined by a guest to discuss how one should NOT run a Facebook group. They discuss how so many people are alienated by the approach used by some admins on Facebook.

Listen to The Nightly Rant Episode 103

The show opens and Mike and Torya discuss election day and how crazy it was for them. They introduce their guest, Gina, who is on the show to discuss how a particular admin has alienated the community with her approach to running a Facebook group for the community.

People ask why there are so many community groups dedicated to Cypress, California.

Mike asks if Gina had seen similar treatment to other people. Gina says it is difficult to say because the admin uses private messages to make rude comments. Gina can only go by what was said by other people. Gina did notice that any comments the admin didn’t agree with would be removed.

Torya points out that post approval is now turned on in that group so nobody can post without her approval. Gina says that’s silly because the admin and her family go to other pages and attack people and berate them.

Mike says adults should be allowed to act like adults. If people don’t like what they see on social media they can keep scrolling. Anyone choosing to engage should be allowed to engage. He then comments about all the lectures he received while running for office. He says he has a right to have feelings about things and to say what he feels.

Torya says that the guy trolling Mike in the Cypress Community Open Forum is not a very classy guy.

Mike asks Gina what she thinks about how adults are treated on the larger community group. She says adults are treated like children. She feels as though it is kindergarten on that group. You are not allowed to have an opinion unless it coincides with the admin’s opinion. If you don’t agree with the admin, you get a lecture from the admin and get kicked out of the group.

Mike explains how he got kicked out of the group for stating that someone who was just kicked out for not having a profile picture, actually had a profile picture. This then lead to the family of the admin making the claim he had called her Hitler. The “proof” was posted publicly and showed Mike had never said such a thing. What Mike had actually called them was “fascist dictator.” 2 years later that family is still claiming they were called Hitler.

Gina opines about why they never let anything go.

Mike says this family thinks they run the city. He points out that elected officials have thanked him for being honest online. This family disputes those things and says Mike is a liar. Clearly they are out of touch with reality.

Mike asks Gina how she would handle the group differently. She says that as long as there isn’t profanity, people should be allowed to make comments and should be left alone.

Mike points out that their group is all about real community. They believe people should be able to tell the community about poor service they have seen.

Mike says you cannot have a community if you can’t act as an adult.

Mike makes the point that people are continually blocking those they don’t agree with. He says that eventually you stop learning because you see nothing but agreeable opinions.  He gives examples of people who just don’t get it.

Mike asks Gina her thoughts on the recently passed Measure A. Gina says she didn’t know much about it, but Mike’s comments helped change her to a Yes vote.