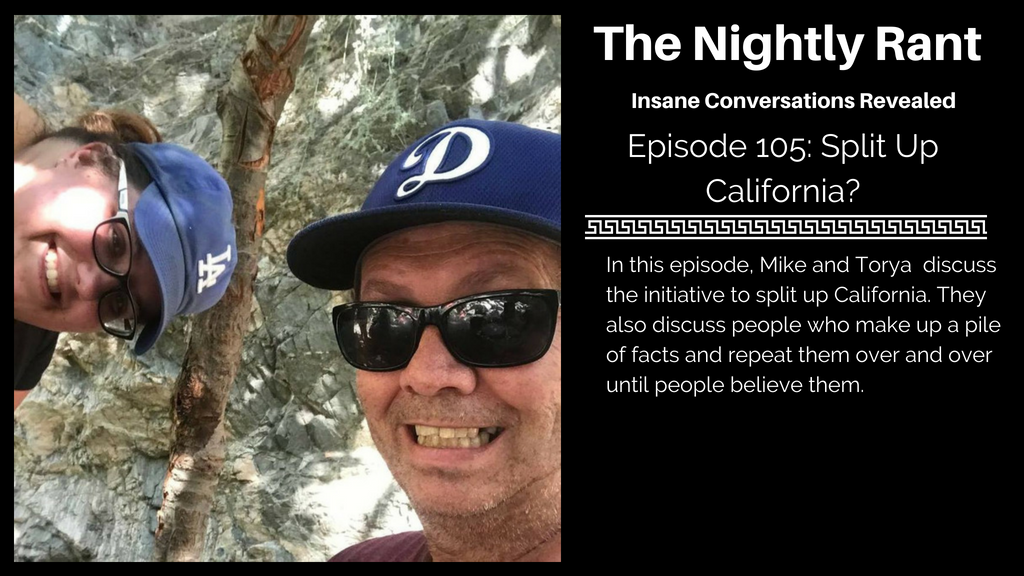 In this episode, Mike and Torya discuss the initiative to split up California. They also discuss people who make up a pile of facts and repeat them over and over until people believe them.

Listen to The Nightly Rant Episode 105

They are back after a hiatus to decompress from campaigning. Torya has a topic she wants to discuss.

She wants to discuss the initiative to split California into 3 states. She points out that people will be grocery shopping in one state while living in another state or they will live in one state and work in another. Mike points out that South Bend, Indiana is on the Michigan border so people there work in Michigan and live in Indiana and vice versa. Mike’s take is that it is no big deal because anyone who lives near to a border experience this same exact thing.

Torya sees a problem due to the economy. Why would you want to break up a large economy and remove certain sectors from that economy? Mike says he doesn’t know how this will be implemented and he hasn’t really gone far with it because, to him, it is asinine.  Torya feels the people who want to split up California are the very same people who want to have California secede from the United States. She feels that if it passes it will be like Brexit for Britain. The people will vote for it and immediately regret it.

Torya says splitting into North and South California would make more sense. The two are quite different places.

They begin discussing people who create a set of facts and then repeat them until people believe them.

Mike and Torya also mention that there is a huge police presence in their building. They are busily searching an apartment in the back of the building near Mike’s car. Mike feels they served a search warrant and that’s why there was such a large group of officers. Torya points out that they even brought a K9 unit.

Torya discusses how Pretty Girl is losing weight due to the laser pointer they bought. She plays so hard that she drops the pounds.

This leads to a discussion of neighbors and how hard it is to get new neighbors. Mike says people are not as friendly at first. It takes time for them to trust you enough to speak to you.