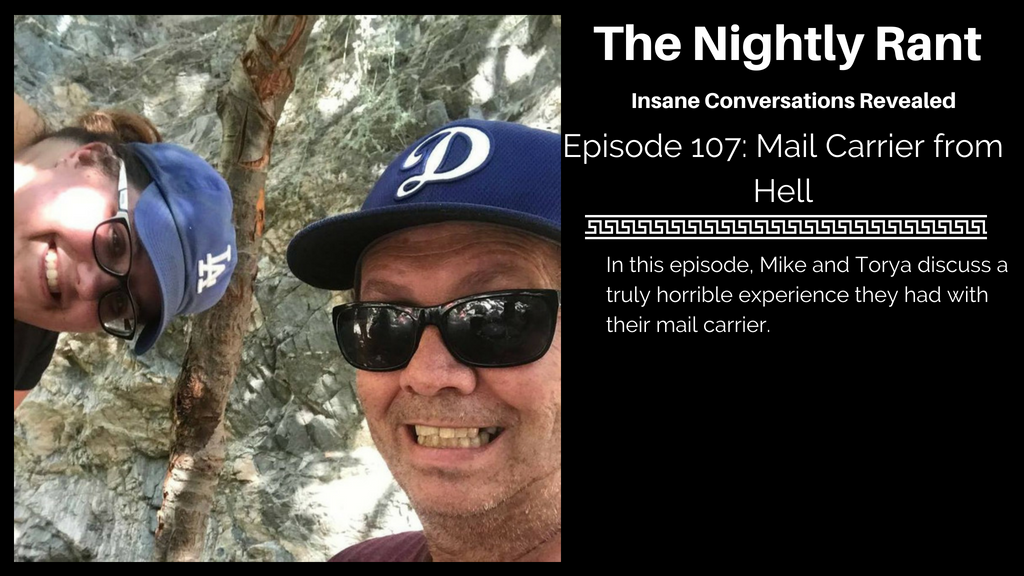 In this episode, Mike and Torya discuss a truly horrible experience they had with their mail carrier.

Listen to The Nightly Rant Episode 107

The show opens with Torya describing an experience they had with their mail carrier. Torya speaks of “that person who just exists in your world” who is not the most significant person in your life and then one day they lose their shit about nothing and you realize “there has been a lunatic in my life all this time”. Torya doesn’t understand what happened.

Mike describes the encounter. They were leaving to go get Alyssa from her dance practice. As they were leaving the building, the mail carrier was finishing up the mail delivery. Mike did what he always does–showed her the key and that he can open the mailbox. They usually say “hold on a moment” and then hand you the mail. The mail carrier from hell immediately slammed the mailbox shut and yelled “That’s my mailbox!” They left with their package. When they returned there was a card in the box saying they would not be receiving any mail. Mike saw that as a problem because he isn’t going to the post office to get the mail. Torya reminded Mike that the mail carrier was yelling at him as he walked away. She said she was going to talk to the building manager and that she would stop mail delivery.

Mike says he wants an apology from the mail carrier from hell.

Torya is tired of stalkers and the mail carrier from hell. She is just done with it all.

Mike does not appreciate it when someone just goes off for absolutely no reason at all. The mail carrier from hell took 0.3 seconds to go from quiet to extremely nasty. Torya opines that this mail carrier from hell must have lots of people who give her trouble for how horrible she is at her job.  She suspects something else is going on there.

Mike says he was surprised the mail carrier from hell would abuse her authority. All because of a question that was asked. It makes no logical sense at all. He points out that this isn’t the first time he has had to contact her manager. Mike uses Khole Kardashian and an incident she had with someone she dated to show that people use their own opinions and beliefs to frame a story.

Mike says he doesn’t care what your beliefs are as long as you are consistent. It helps him know the boundaries. It makes life much easier when you understand the boundaries. Inconsistent behavior just causes major problems.