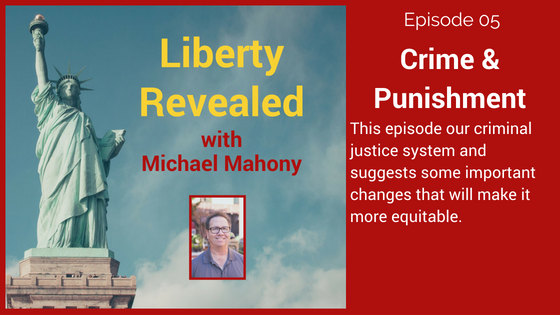 Welcome back everyone! Today I want to talk to you about an important topic in society–crime and justice. I will likely be presenting a perspective that you may not agree with, but I have a strong argument to support my perspective.

One of the biggest problems facing society today is that many things that should not be considered crimes are labeled as crimes. Worse yet, many of these actions are punished more harshly than are violent crimes. This has evolved over time as society has gotten more and more irritated by where society is headed.

I believe that the label of “crime” should be limited to actions of force or fraud against another individual or group. To me, that is what defines a crime. I believe that such crimes should be prosecuted and punished by our justice system but that actions that don’t involve force or fraud should not be criminalized or penalized in the first place. I believe all laws that create crimes without a victim should be repealed. Only actions which infringe upon the rights of others should be considered crimes. I believe in restitution where the criminal must make their victim financially whole again.

Crime and Punishment and the Three Strikes Laws

Many areas of our country have instituted “three strikes and you’re out” laws that seek to be a deterrent to future criminal acts. These provisions are unlikely to significantly reduce crime. A relatively small proportion of all offenders commit most of the crime. Removing these “career criminals” from society makes sense. But, the “three strikes” approach is illusory. Nearly every study of criminal behavior shows that men between the ages of 16 and 35 commit most of the crime. Those leaving prison after the age of 40 have an amazingly low recidivism rate.

Yet, “three strikes” would keep three time losers in prison into their 60’s, 70’s and beyond. With prison costs running at more than $60,000 per bed (plus $23,500 per inmate per year to incarcerate an individual), there is a significant danger that “three strikes” could lead to the early release of truly violent criminals serving their first or second sentence, in order to warehouse elderly criminals who pose little or no threat to society.

Crime and Punishment and Increasing Crime

Here in California we passed a two ballot measures that have created a significant increase in crime. Propositions 47 and 57 were sold to the voters as positive things. In fact, by reclassifying crimes from felonies to misdemeanors, the State of California facilitated the early release of some 10,000 criminals. Again, if these people committed acts that constitute fraud or involved the use of force on others, they should have remained in jail. While several provisions like recreational use of drugs were reduces penalties, fraud was also one that was reduced. I believe this is wrong and has definitely lead to an increase in crime across the state.

The War on Drugs Affecting Crime and Punishment

I believe that ending the racist War on Drugs is an essential part of any plan to improve our justice system. Millions of people, most of whom are people of color, are arrested, jailed, and given a criminal record because they voluntarily chose to consume something. Not only is it immoral for the government to decide what is and is not acceptable for people to consume, criminalizing drugs does nothing to reduce the scourge of drug addiction and abuse. The War on Drugs hurts the people we should be trying to help and diverts criminal justice resources away from prosecuting actual crimes committed against people and property. Drug abuse should be considered a healthcare issue, not a criminal issue. I plan to cover the war on drugs in more detail in a future episode of this show, but for now, this is my position.

I also believe that our current justice system has many punishments that far outweigh the crimes committed. It is my belief that punishments should be proportional to the crime committed and should be fair and humane. Prison systems across the country are commonly reported in the news for their terrible living conditions. I believe this must change. All people’s rights matter, whether they are incarcerated or not. Our prisons need to be as safe, clean, and humane as possible.

In addition, many jails around the country are violating the rights of those they imprison. Here in Orange County there has been a scandal involving the county jail system. Apparently the Orange County Sheriff’s office has been using jailhouse informants to get information on those who are incarcerated. This has caused a major issue in Orange County, with demands for an investigation. Abuses such as this need to be curtailed.

The appropriate way to suppress crime is through consistent enforcement of laws that protect individual rights. I am calling for an end to “hate crime” laws that foster resentment by giving some individuals special status under the law. I applaud the trend toward private protection services and voluntary community crime control groups. Hate crime laws are being used to punish black people and that has got to stop.

Setting Up Former Inmates for Failure

Additionally, our justice system currently sets up former inmates for failure. When someone is released from prison, the goal is for them to find a steady job, stable living situation, and avoid criminal activity. Evidence shows that overly long prison terms do very little to reduce recidivism and may actually make it more likely for someone to re-offend. Currently, recidivism rates are very high. These rates could be easily reduced by making prisons more humane (so that prisoners are not physically and psychologically traumatized by the experience), making sentences more reasonable and proportional to the offense, and welcoming offenders who have served their sentences back into society and the workforce.

In my opinion, I want to see crimes that are truly crimes prosecuted and punished. I also want behavior that does not involve force or fraud legalized and dealt with outside the criminal justice system. I want to see justice for victims and also justice for the accused and convicted. The rights of every person matter and we must not turn a blind eye to the rights of the accused or the convicted.