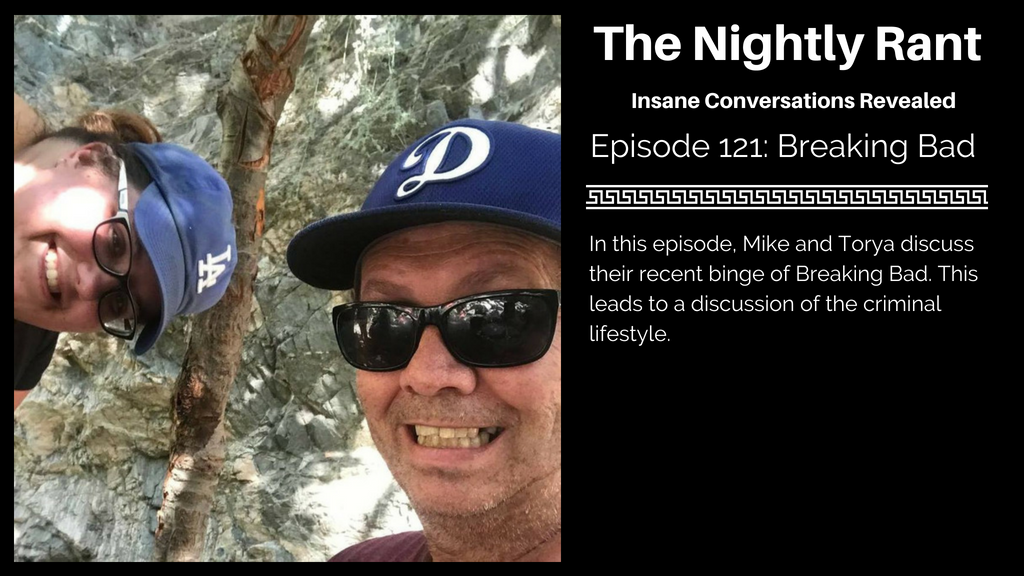 In this episode, Mike and Torya discuss their recent binge of Breaking Bad. This leads to a discussion of the criminal lifestyle.

Listen to The Nightly Rant Episode 121

Mike begins the show by commenting on an observation he's had about new animals entering the house. He notes that at first they are shy and complacent. That all changes.

Torya mentions how Odie stole a chicken bone off the table. Mike says the funny part isn't that he stole the bone, he thinks the funny part is the wrestling match. He points out that earlier when they were on their walk, Odie was ready to bark at someone and Yogi had his back. When Mike told Yogi to stop, Yogi stopped immediately. Mike points out that the dog knew he wasn't supposed to have the chicken bone because he grabbed it and tried to run elsewhere to eat it. He doesn't do that with food he knows he is allowed to eat. Torya could not pry the bone away from Odie at first. She had quite the struggle.

Mike opines that Odie survived mostly on table scraps. This is why he hates breakfast (kibble). He eats at night because he is hungry. He eats dinner out of habit and desperation.

Odie is very smart and learning things quickly. He also appeared on television and it will air at some point in the near future. It is on the Home & Family show from Thursday, July 26, 2018 on the Hallmark Channel. Torya says they can be found on YouTube as well.

Mike begins a discussion of Breaking Bad. He is convinced that Walter White's wife, Skyler, is a mastermind. Had she been involved from the start, they would have taken over the cartel. They discuss how Walter White was able to make the purest methamphetamine ever seen.

Mike observes that Walter got more and more obsessed with money. Eventually, he told his wife what was going on. She was responsible for helping them launder their money through a legit business. She made sure the business was run like any other business so there would be no suspicions. She actually hid their money in a storage unit.

Torya warns they will be presenting some Breaking Bad spoilers.

Mike points out that Walter cared too much about other people. It made him a less effective drug dealer. However, he was overly careful so they would not be discovered. His partner was not quite as careful. This would raise suspicions. It seems since you are dealing with drugs you probably should be extra careful.

The discussion turns to reasons to be careful and how to do that. This all leads to a discussion about how being honest means you don't have to remember crazy stories later.

Mike mentions that Odie is still looking for a home. Odie gets along with everyone. He loves Yogi.