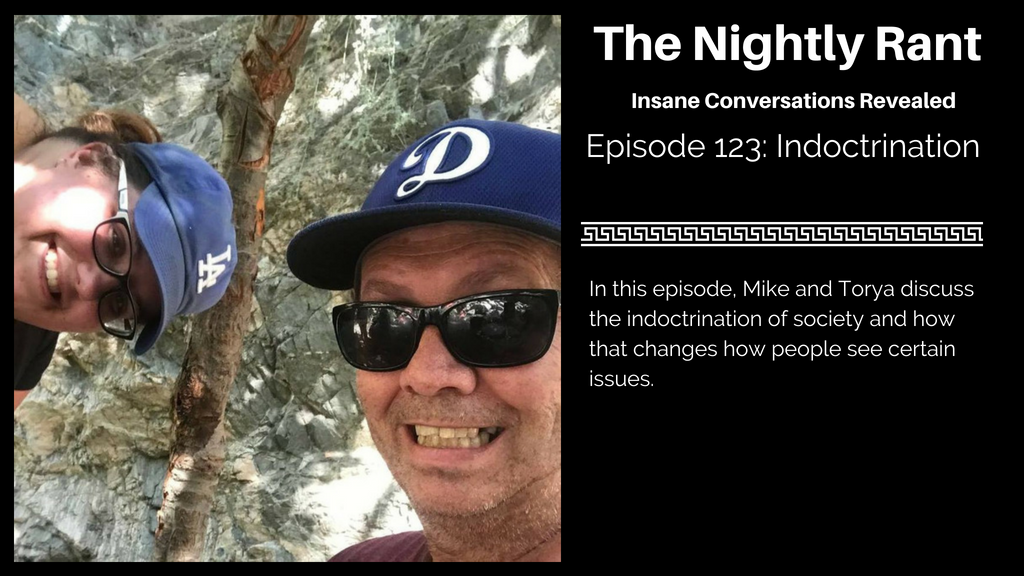 In this episode, Mike and Torya discuss the indoctrination of society and how that changes how people see certain issues.

Listen to The Nightly Rant Episode 123

Mike opens the show saying he wants to talk about indoctrination and Torya sounds confused. Did they not discuss this before the show? Let’s find out!

Mike explains that “indoctrination” has a specific meaning. He uses the education system as a means for explaining this. He talks about the television series called Waco that shows how the government spun the story to prevent backlash. People claim the government doesn’t have a lot of control in our life. Mike believes the government indoctrinates people from a young age. He notes that from his first child to his last child, there are differences in how the children are taught the topic. The agenda seems to have changed.

Mike uses the war on drugs as an example. They realized that they can’t stop the dealers if they don’t stop the users. As a means for winning the war on drugs, they taught the kids how bad drugs are as a means to indoctrinate them. They discuss what will happen to marijuana as part of this discussion.

It concerns Mike because children are taught things in school that are not really true. This creates voters who vote based on what they’ve been taught. Mike points out a discussion he recently had wherein the gentleman claimed Mike was wrong, yet he pointed out that the government does teach you certain things. The man thinks Mike gives the government too much power, yet he knows the government will have you believe certain things.

Torya says most people have no idea what they are voting for. Mike shifts to how companies indoctrinate new employees. Mike is then triggered by indoctrination and gives various examples. He points out how society sets up norms and then forces everyone to comply with those norms. These norms change depending upon the perspective of the government. When the government changes the indoctrination, society changes its viewpoint on the issue.

Mike points out that society is what should control right and wrong. If society decides something is OK, it should be OK. That can’t happen right now because the government has indoctrinated us to believe a certain way. Things like abortion, gay marriage, etc. are all based upon indoctrination. As the government changes the indoctrination, society begins to believe differently.

Mike uses the example of their apartment building. He says that if enough people got pissed off about the way things are and went to management, management would be forced to change their approach.

They discuss how society needs to adapt and change and that indoctrination keeps that from happening. Mike says that there shouldn’t be laws that control social issues. Torya suggests an expiry date on laws. That way society can be forced to revisit the laws when they are set to expire.