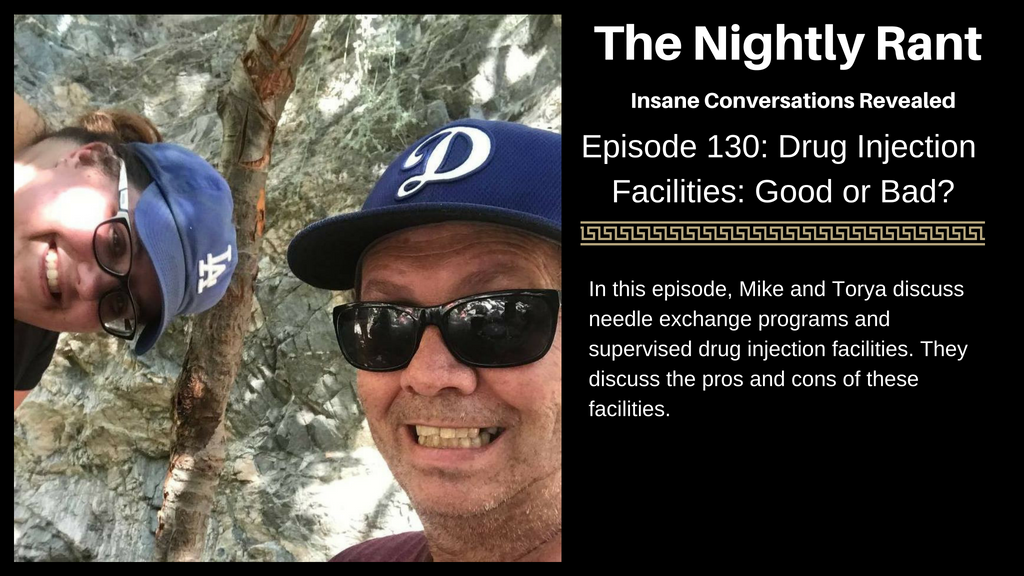 In this episode, Mike and Torya discuss needle exchange programs and supervised drug injection facilities. They discuss the pros and cons of these facilities.

Listen to The Nightly Rant Episode 130

Mike begins the episode with a rant about a proposed needle exchange program. The idea is to make sure that needles stay out of parks and schools. The user will bring in their needles and exchange them for new needles and then be given an extra 20. Torya sees nothing wrong with the needle exchange at a 1 to 1 ratio, but feels the plus 20 is extreme. She says you can go in with 1 needle and come out with 21 needles, so you have no reason to keep the other 20.

They then go into a discussion of a supervised injection facility that is in Lethbridge, Alberta, Canada. Lethbridge has 80,000 people. They opened the supervised injection facility because there was a large increase in the number of overdoses. They had 80 customers use the place 200 times in the first week and prevented 2 overdoses. It is going so well they are considering opening a second one. While there is much opposition, can you argue with providing a place where people won’t die while taking their drugs? Maybe it prevents them from doing drugs in the parks where your children play? Why not give them a place to take their drugs where they don’t put anyone else at risk?

Torya points out that these facilities cut down on the cost of emergency services. They don’t need to call 911 because they have medical professionals on site.

Somehow the discussion goes to needles poking feet and toes. Both Mike and Torya relate stories about this.