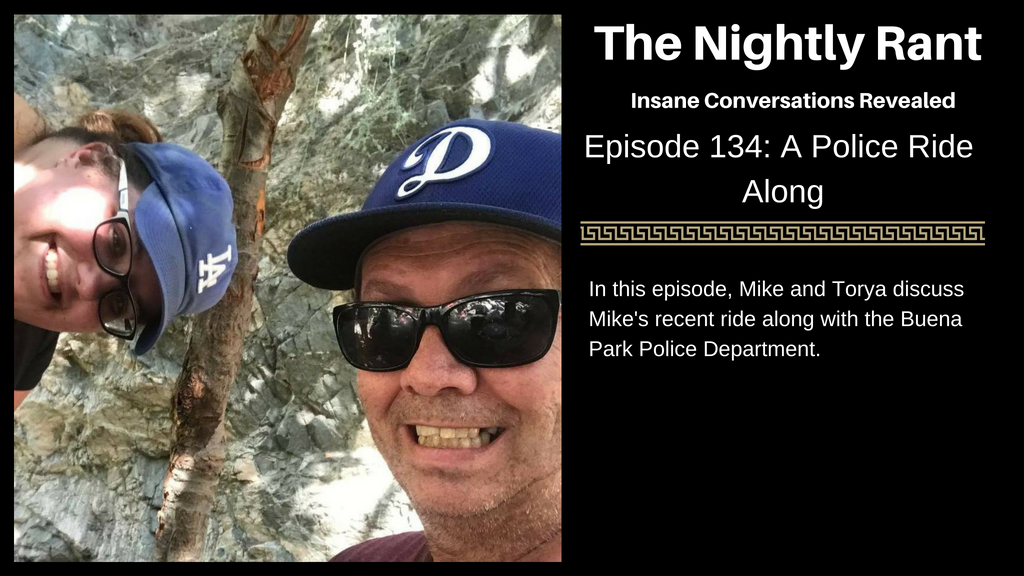 In this episode, Mike and Torya discuss Mike's recent ride along with the Buena Park Police Department.

Listen to The Nightly Rant Episode 134

Torya is excited that The Nightly Rant Best Of episodes is being released now. Mike is more excited by the fact that they now manage to release 5 episodes a week yet again like when the show launched.

Torya complains Mike had other plans during the normal podcast recording time. Mike went on a ride along with the Buena Park Police Department. Mike describes what happened during his ride along. He got to discuss the city with the officers he was with. He got to find out about police procedure. Mike says the female office he rode with was exactly like Torya.

Mike discusses how the police have to manage the coverage in the city. They have multiple shifts that overlap in order to maximize coverage. Torya says she believes surrounding cities help if there are big incidents. Mike recounts how there used to be 2 officers per vehicle.

Mike discusses details that relate to what he learned from the police officers during the ride along. They discuss how the chief can change the entire atmosphere of the police department. As the leader, the chief sets all the rules. Mike says that the training makes many things consistent. This leads to a discussion about training.

Mike continues to talk about the fun he had with the ride along. He enjoyed the female officer because she was extremely sarcastic just like he is.