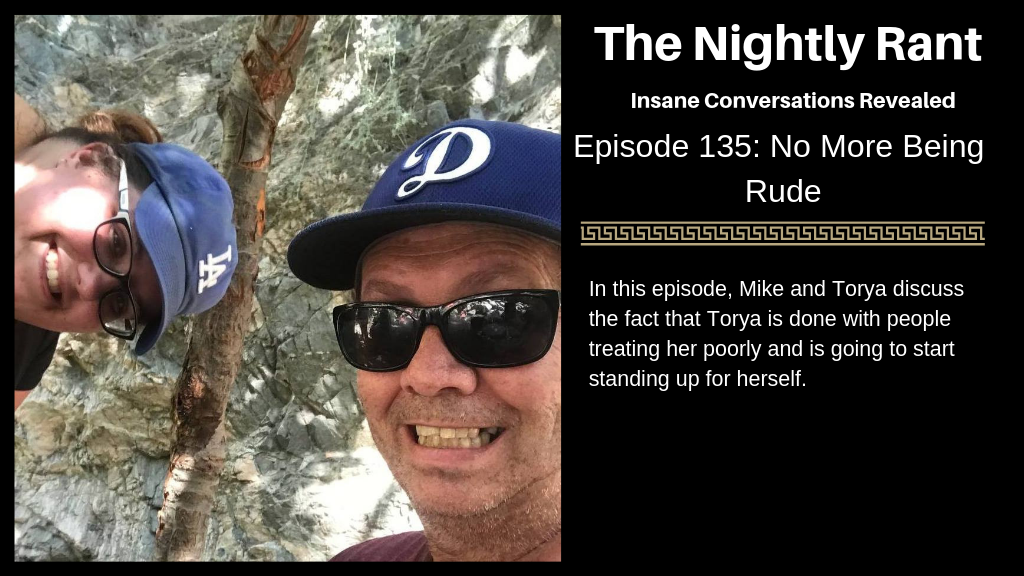 In this episode, Mike and Torya discuss the fact that Torya is done with people treating her poorly and is going to start standing up for herself.

Listen to The Nightly Rant Episode 135

Odie had a huge day! He went to an adoption event in Pasadena, California. He spent all day at the event. He was taken by one of the ladies from the rescue because Mike and Torya had to attend Mitchell's soccer game. Torya says Odie was excited that she came back for him.

Mike discusses the fact that dogs DO remember things unlike what many people say. Torya says that if they went somewhere with Odie and his former owner was there, he would be extremely excited. Mike points out that Yogi clearly noticed Odie was not here when they returned after the first game. Yogi has clearly accepted Odie.

Torya explains that she is usually a passive person, but she is done with letting people be rude to her. Mike says he is proud of Torya for reaching this point. Mike reminds Torya that it is great to stand up to people, he wants to see her maintain her dignity in any situation. He says that people who just go off on others tend to look like a lunatic.

Mike points out that he is blunt. Some people point to that statement and say it is an excuse to be rude. Mike owns being blunt. He also works hard to make sure he doesn't come off like the jerk.

Torya points out that Mike definitely shows restraint. She says that if someone gets in another person's face, they do so in order for you to take the first punch. If they truly wanted a fight they would start the fight themselves. The fact they don't shows they don't really want the fight.

Mike points out that people say things they don't mean all the time. It is something that has to be handled with dignity.

Apparently, Mike and Torya had a situation. Mike was joking with someone and another person jumped in and caused conflict. Two other people hurled personal insults. Mike's response was to watch and listen and handle his own business. He was confronted by a woman who continually asked if Mike was going to hit her. Mike had no clue where that craziness came from. This person's husband had to jump in and make the situation even worse. It doesn't surprise Mike because this particular person has caused so much drama in the past.