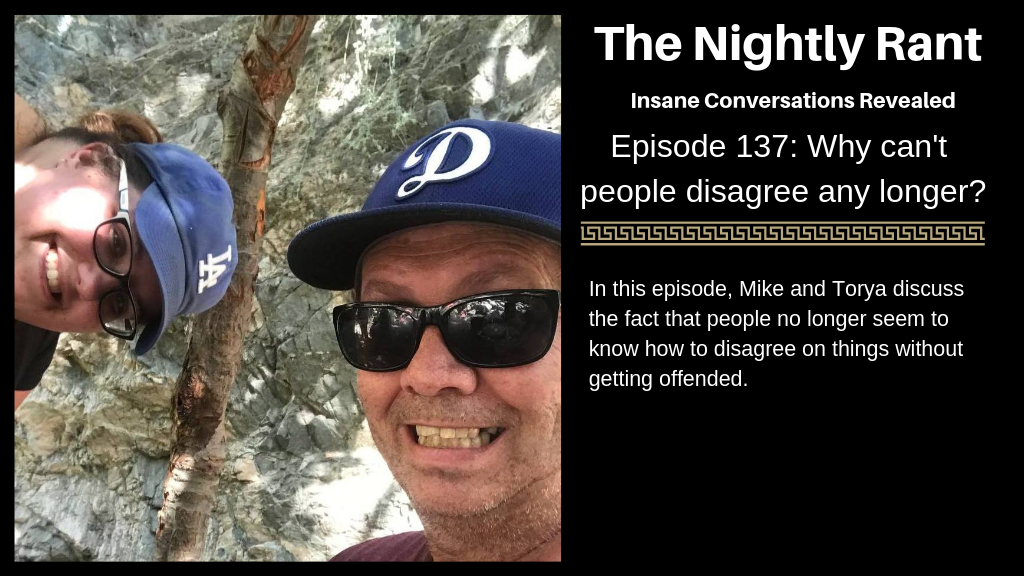 In this episode, Mike and Torya discuss the fact that people no longer seem to know how to disagree on things without getting offended.

Listen to The Nightly Rant Episode 137

Mike opens the show by asking what has happened to society that they can't disagree with each other. Torya says it is because people were never taught their opinion is made of pure gold.

Mike says you cannot have real discourse when you are unable to discuss things. A difference of opinion many times inspires conversations. He points out that nobody is right 100% of the time. He points out that people are so polarized by every topic and they just don't know how to discuss disagreements. Extremes are never correct. It is a fact.

Torya points out that this is why utopian political systems never work. Everything would have to be perfect, but that just doesn't ever happen. Mike says that the dogmatic people are the problem here.

Mike explains that he believes you change things by being a leader. You find a topic and work to change it to something closer to your own ideology. You make change slowly and deliberately.

Torya points out that they've had a similar topic back to back. Adulting and disagreeing both relate. Mike says consistency is what should rule things. If someone has an idea, as long as they stay consistent, things are fine. He uses the example of Libertarians who don't want income taxes at all. When there is a tax cut they rail against it. Mike says a cut is going towards no taxes, so it is consistent with the idea of no taxes. Small changes take you to the right conclusion.

Torya wishes people would stop voting based on the party. She suggests a polling system that asks questions and then tells you who/what you should vote for. You could change the suggestion, but it would link you to the right issues and what your actual stance is. Mike thinks the idea is great, but wonders about how to execute it.

Mike relates this to the hiring process he was taught. You determine what you want to be done and how much you will pay for it. You then look for the top 10% of the people willing to accept the job at the rate you can pay.

Torya says she wishes people could be informed about candidates in a more efficient manner. Mike suggests that everyone should be allowed to link to a website from the voter guide so that everyone has access to the guide and not just the rich candidates.