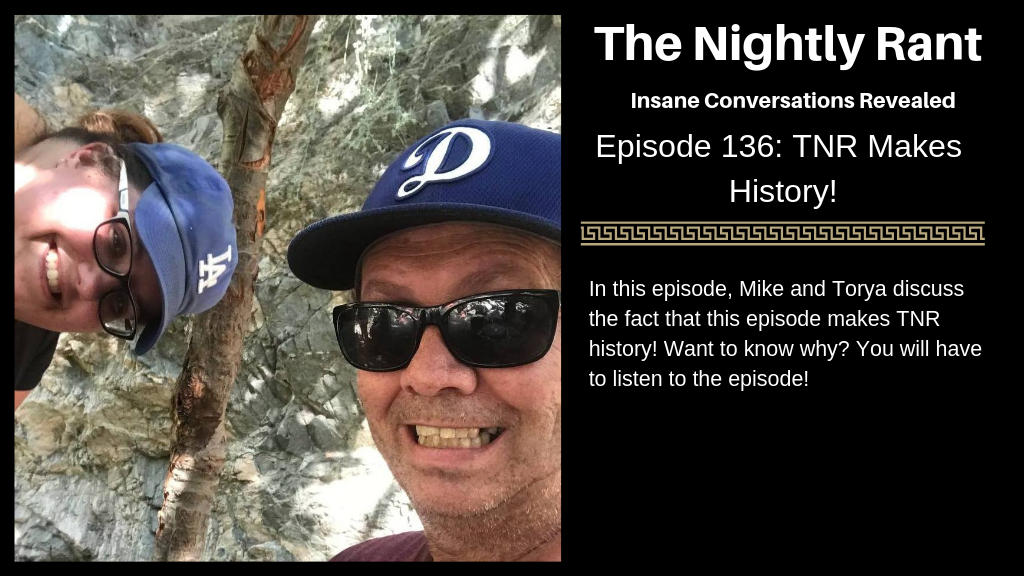 In this episode, Mike and Torya discuss the fact that this episode makes TNR history! Want to know why? You will have to listen to the episode!

Listen to The Nightly Rant Episode 136

Listeners duck and take cover! The Nightly Rant made history! For the first time in 136 episodes, the show opened with Torya speaking first! This has not happened because she is always too shy to start things off, but this time she tells us how many times she’s been annoyed this day. History has been made! Torya doesn’t believe it and argues that she didn’t talk first. Of course, she doesn’t control the record button, so that would explain why she didn’t know she went first.

Torya rants about adult-aged people who can’t act like adults. She describes a situation where people were uncomfortable and then acted like toddlers.

Torya wants to know why there are 2.5 generations of people who can’t be adults and Mike answers that it is helicopter parents. He feels that being an adult has almost been bred out of people. Torya says she can make decisions, but that Mike makes fun of her when she can’t make a decision. Mike says it is because she is a millennial. Mike points out how certain cultures perpetuate this issue.

Torya says there is no excuse for not being an adult. Mike says the helicopter parents need to fix the problems. Mike says this can be done by asking questions that guide them to solutions rather than just telling them what to do.

Mike has a theory. He says these helicopter parents are afraid that if their children don’t perform well, they will look bad and that’s why the interject and do things for their kids.

This leads to a discussion about how Mike and Torya were taught while growing up. They both relate their own experiences and how they affected them.