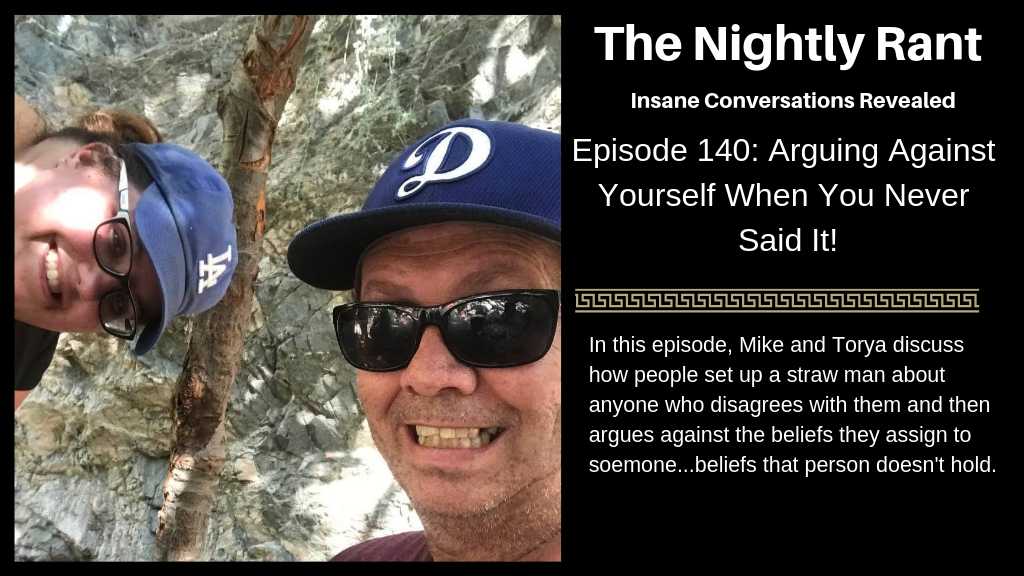 In this episode, Mike and Torya discuss how people set up a straw man about anyone who disagrees with them and then argues against the beliefs they assign to someone…beliefs that person doesn't hold.

Listen to The Nightly Rant Episode 140

Mike begins the show sounding rather upset. He is tired of people who lie and make up things that never happened. Torya says it sounds like there is a story behind this tirade.

Mike says that what people do on their own time is their own business and is not something anyone else should judge. He understands why an employer wouldn't want someone smoking pot at work. It just makes sense. However, if rules are made that seem unreasonable, maybe the rule should be changed?

Sometimes the discussions people have are simply confusing. People tend to tell others what they think and believe without knowing the other person. They don't bother to listen. They simply argue for the sake of arguing. Many times people who are on the same side wind up arguing.

Mike has concluded that people want to feed their own agenda, so they make up a narrative that makes you sound like the person they've decided you are. He says that the police have used body cams to combat this issue.

They begin a short discussion about an off-duty officer in Anaheim who confronted some teens stomping all over his lawn. They both believe there was a lot more than we all saw. The video was edited and didn't show the entire story.

Mike points out how people act when someone corrects a misconception they have. They immediately bash the person correcting them. They make assumptions about the person that is untrue.

Mike asks Torya the email address for the show and she mocks how he generally announces it.

Mike wants Torya's thoughts on the Best of episodes. She says she is a giant fan of throwback episodes. They then discuss the possibility of pulling snippets from the show as it is edited and later creating an episode from that audio. Mike says it would be complicated but might work. The problem would be cataloging the information. This is a must in order to be able to find the audio later.