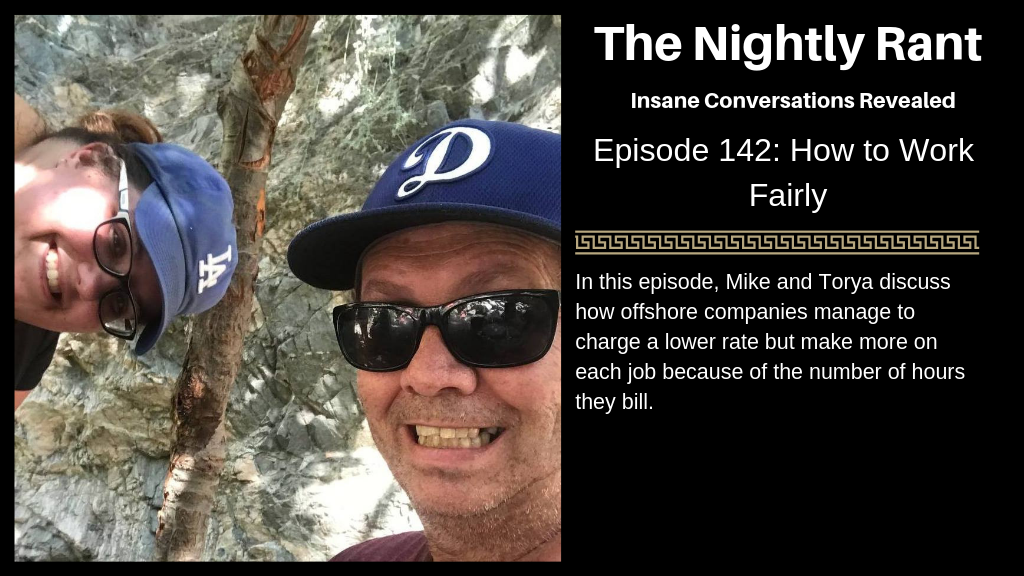 In this episode, Mike and Torya discuss how to be fair in how rates are decided upon by freelancers.

Listen to The Nightly Rant Episode 142

“Busy is our usual state of being, but today was just more hectic!” — Torya

Mike appeared on The Bitter Truth with Abe Abdelhadi. Torya mentions that Abe will be on The Nightly Rant.

Mike teases Torya about her engagement on the show. Torya wants to know why people from other countries think it is OK to tell you they will charge a lower rate for their work and then just charge you 15 times what they really should, which gives them more than 2 times the normal rate. They have an example from one of Torya's clients. Mike said it would take 2 hours and the client was charged 16.5 hours. An argument ensues about rates. Of course, Torya is correct as usual.

Torya uses some other examples and says maybe they should increase their rates rather than charging too many hours.

Mike goes into a discussion about how consistent work is more important than a huge rate, but that the rate is still very important because a low rate can lock you into some bad situations. Torya agrees. She says that package deals can use cheaper rates and then any overage charges can use a higher rate. This is because package deals enable you to plan while overage can't be planned.

Torya feels that package deals are the best because you get control. If you want to fill 910 hours for a business, you can sell packages until you fill up the 910 hours. Yes, the package is based on the hourly rate, but it isn't variable. You charge for the package, not the hours. You set a boundary on how many hours you will work for that fee. You then know how busy you should be each month. It makes it easier to track things.

Mike says he gets frustrated by companies that mess with their hours. He says they give a bad name to everyone else.