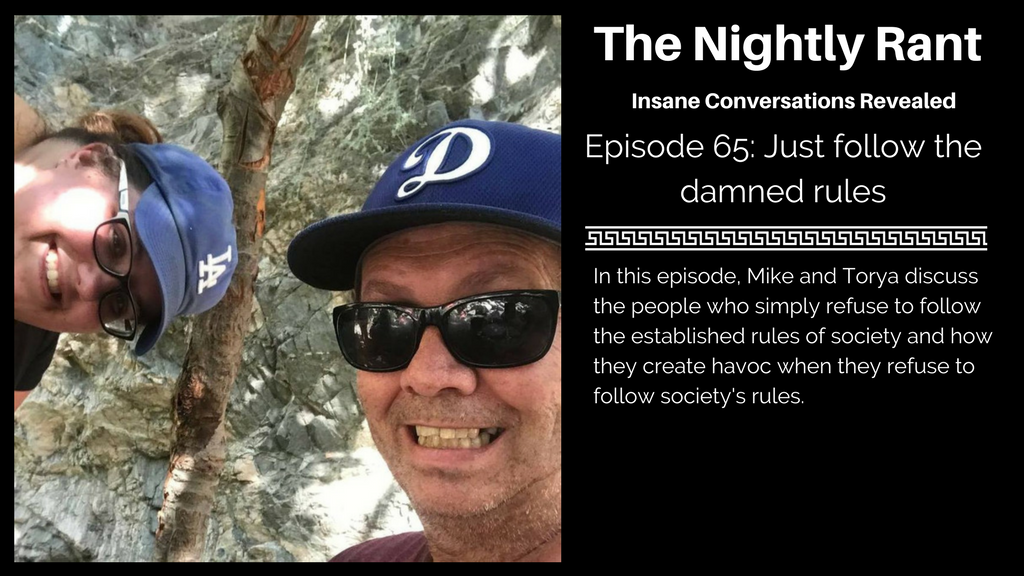 Listen to The Nightly Rant Episode 65

It honestly drives Mike crazy when people don’t follow the rules set up by society for their behavior in public places. Torya calls him “sticklery” because he is a stickler for people following the rules.

Mike recounts a situation he had while taking kids to school. Torya explains that the crossing guard assaulted Mike’s vehicle. Mike is angry that the crossing guard is instructing people to violate the rules set up by the school itself. Mike then explains that he decided to make up his own rules at one point and dropped Mitchell off at the curb on the street where it says not to stop, but has a walkway leading into the school. Torya takes exception to Mike saying he was simply “steamed” as she felt it was much more than that.

Mike feels that people in general try to make up their own rules. It takes someone getting towed away for apartment residents to start complying with the parking rules. Mike explains to Torya why this show is called “The Nightly Rant” and explains that maybe he should go on a rant since he hasn’t done so in a long time.

Mike’s rant includes soccer parents who pick and choose when to get their kids to practice, why the rule setter doesn’t enforce the rules, people who adjust goals just because they feel like it and for no other reason, people who ignore where the school says to pick up their kids, people who smoke in the apartment hallways, people who set expectations and fail to even come close to meeting them and a few other things. It is an epic rant of epic proportions.

Mike feels that people tend to treat lack of honesty on minor things as water under the bridge. He feels like most people move past lies too easily. The discussion approaches the issue of whose fault it is when a person in authority imposes an edict on the subordinate. Torya calls it manipulation and blames the person in authority for that issue. Mike agrees and says that this is why he cannot blame a certain someone about the lies they are forced to tell. Mike says he just accepts that fact and moves on. Mike says that people are taught to follow the directions of their superiors, yet when they do that society gets upset and makes that person a scapegoat. At the same time, when someone refuses to follow the superior’s orders because they feel the orders are wrong, the same people get upset that the orders were not followed. It cannot be the both ways.