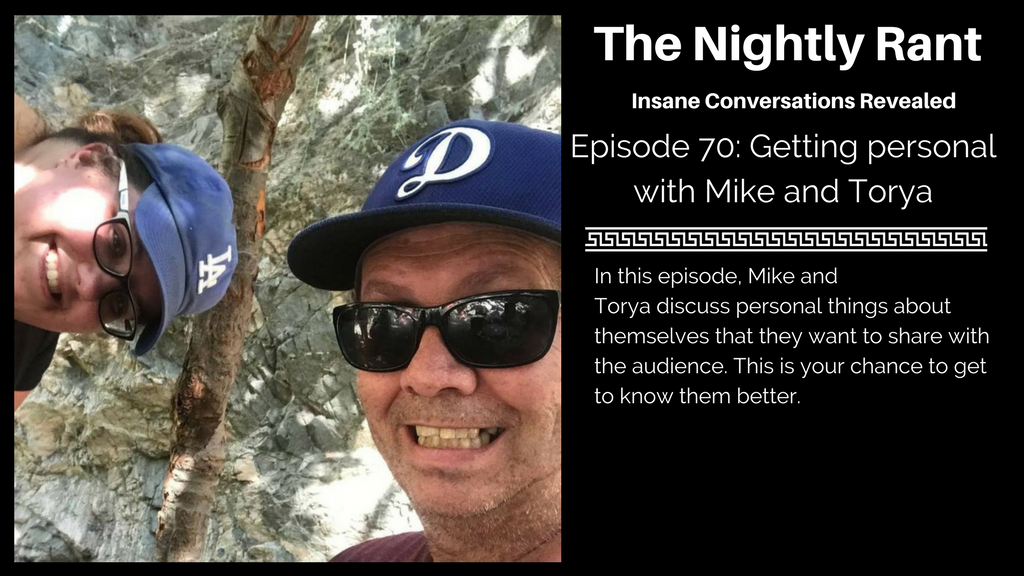 In this episode, Mike and Torya discuss personal things about themselves that they want to share with the audience. This is your chance to get to know them better.

Listen to The Nightly Rant Episode 70

Technology problems are likely to plague people who work in technology 7 days a week and record podcasts 6 days a week. .

Mike asks Torya to share some personal things about herself. He states that people by now probably have their own opinions about them and now is their chance to set the record straight.

What does Torya like about her closest friends. She says they all have great senses of humor, but not all the same exact sense of humor. She says that because her sense of humor is odd she finds she has friends with a wide spectrum of humor. Mike compares Torya to a networking group that can only have one person per trade line.

Torya explains that some people pretend they fit into your world only to eat your spine out. Mike says they are like a lingering virus that eats your soul.

Mike then explains the common denominator with his friends is they are either sarcastic or they enjoy sarcasm or both. He is told by Torya that he is the best at being sarcastic of anyone she knows. Mike explains that his sarcasm is why he needs friends who enjoy sarcasm or are sarcastic. They tend to understand and not get butt hurt by the sarcasm. Mike says his friends can take shit and dish shit out. He tells people (and he means it) that if he is not teasing them, he doesn’t like them. He doesn’t entertain people he isn’t interested in. This is how people know he’s interested. He won’t lie. He will just not entertain you if he doesn’t care for you.

Mike asks Torya what is a food she really likes that if she could only eat that for every meal, what would it be? Torya responds that she would choose pizza. Her problem is that she doesn’t know what type of pizza or where she would get it from. In fact, she thinks she would need to select different types of pizza and get them from different places and she would be happy.

Mike says he would choose ground beef because he can spice it so many ways and he loves the taste. Torya thought he would choose chicken. Torya then wonders if they could find a common food and they both think it might be chicken from Raising Cane’s.

Torya asks Mike what drink he would drink if it was the only thing he could drink. Mike immediately responds chocolate milk. Mike is never tired of chocolate milk. He would never turn it down.

Torya’s favorite drink would be one of the lemonades from Pieology. She can’t recall the flavor though.

Mike then asks smart phone or eReader for reading. They both agree that it would be the phone. It just has a versatility the eReader doesn’t have.

Mike and Torya delve into the fact that Mike will need to use his restricted list on Facebook.

Mike begins talking about how adults should act in a courteous manner. He explains his own approach and why he feels it is adult-like.

Mike explains how he treats people exactly how they treat him.