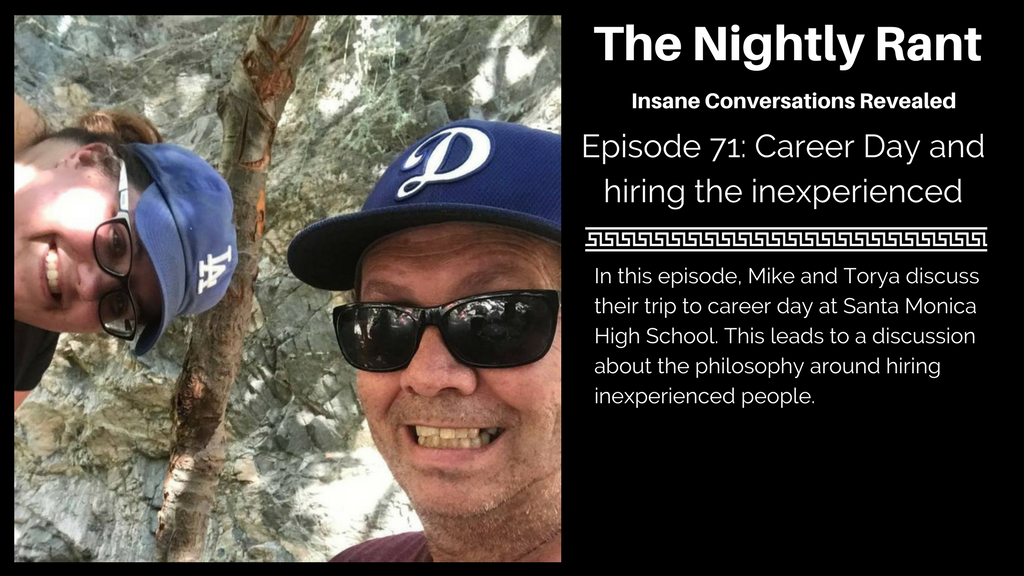 In this episode, Mike and Torya discuss their trip to career day at Santa Monica High School. This leads to a discussion about the philosophy around hiring inexperienced people.

Listen to The Nightly Rant Episode 71

The show opens with a discussion of Mike’s trip to his high school’s career day. He explains that he likes talking to the kids. He says it isn’t any different from talking to his own kids. He observes that the kids hear something that they get and they jump on things with questions. Most of the kids are engaged.

Mike points out that the lack of teacher presence the past few years has changed the dynamic of the career day. He says that it is OK to have nothing to say because the audience may have already researched the field and are convinced that’s what they want to do.

Mike sees his role at these speaking events as telling the kids about his career path and why he likes it. He wants to show what he likes and dislikes in a real and pragmatic way so the kids can make an informed decision.

Mike says the more sessions given the more useful the career day is. He believes the diversity of careers represented makes the day more useful to the kids.

Mike explains his perspective of what was said. They agree that hiring someone who is inexperienced at a lower starting wage. That person gets trained and as they get better at their job they get paid more money.

Mike thinks it is better to hire someone as a trainee and teach them the job. He says giving the trainee small jobs that force them to learn is the way to go.

The show transitions to a discussion about a big structure fire in their town. A mobile home was destroyed and one person went to the hospital.

The discussion ends with Mike and Torya discussing the 100th episode contest. Send your favorite The Nightly Rant moment to info@yogispodcastnetwork.com