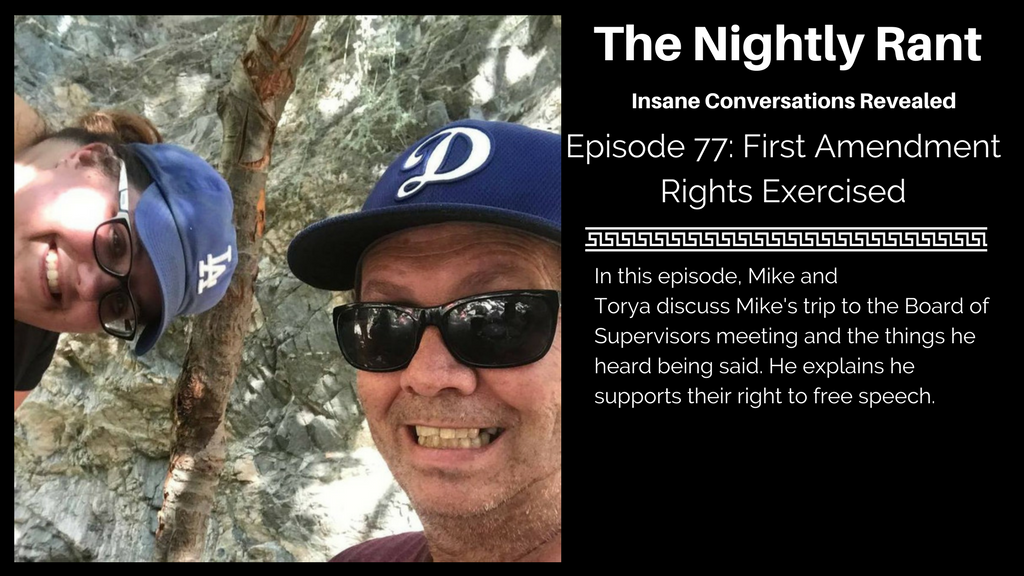 In this episode, Mike and Torya discuss Mike's trip to the Board of Supervisors meeting and the things he heard being said. He explains he supports their right to free speech.

Listen to The Nightly Rant Episode 77

Torya explains that freedom of speech in Canada works much like it does in Canada. Mike explains he asks because they used to have disagreements over stupid things and that they realized it was because they have different ways of doing things (the two countries–Canada and the United States).

Mike says that he has evolved. He has realized that people are allowed to say rude things when exercising their freedom of speech. It is their Constitutional right.

The discussion goes to how people change the meaning of “close” when it suits the situation.

Mike laughs at the fact that in every single little group in this world, when you make a typo, people feel the need to be ruthless about correcting your spelling mistakes. Torya mentions how she spells things like a Canadian. In a group she was in, someone “corrected” her “spelling mistakes” and copied and pasted the “corrected” version and then chastised her about those mistakes.

Mike says he believes that as you go through life, you tend to follow group think, so what you believe depends upon what group you're following at that point in your life.

Mike talks about the recent homeless “decisions” made by the Board of Supervisors in Orange County and what a poor job they've done. He says he respects people's rights to say what they want and thinks the Supervisors should listen to what is said by their constituents.

Mike explains he has grown because he realizes it isn't the message he had a problem with at that meeting, it was the approach to delivering the message that bothered him. He has also realized that once you've stated your stance on an issue, don't repeat the stance, simply refer them to the previous statement.  You need to craft a message that says what you mean to say about the issue and then stick with that message.