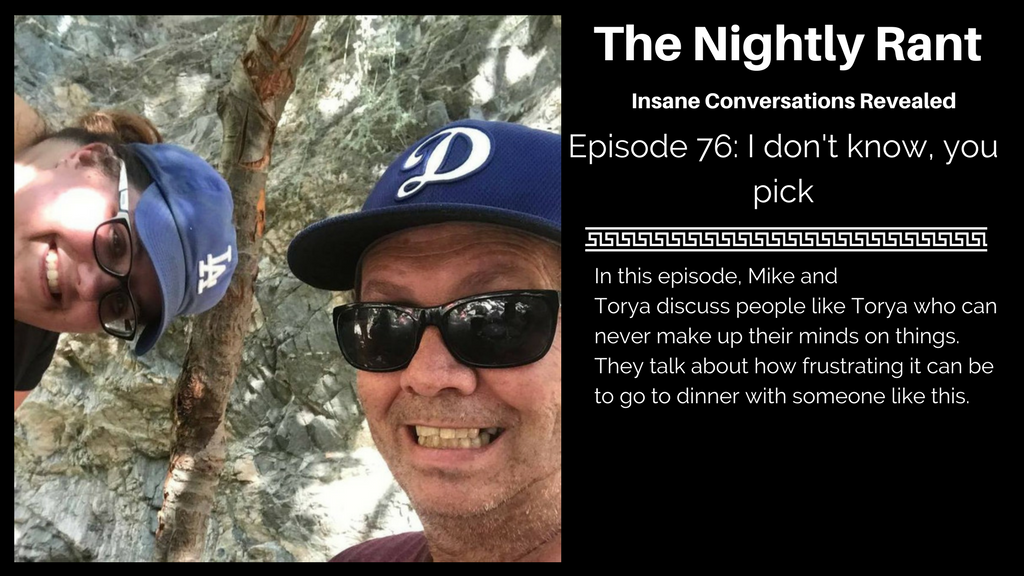 In this episode, Mike and Torya discuss people like Torya who can never make up their minds on things. They talk about how frustrating it can be to go to dinner with someone like this.

Listen to The Nightly Rant Episode 76

Torya can never make up her mind. She admits it herself.

Mike says it sucks because she and the kids can't come up with a place to eat so he is forced to do so. He then tries to find places everyone likes and winds up repeating places. Eventually, they all revolt and say they are bored of those places yet they cannot seem to make up their own mind. This is why Torya doesn't pick food places.

Mike says that when people don't pick for themselves they either need to give feedback on the selections or keep things to themselves.

Here comes the Pope of All Websites with his out of context tweets. He makes up everything he says and gets really wild with those comments. Mike points out that the Pope wants a pissing contest and he isn't interested. The Pope is another example of people who make up things as they go along. Torya compares him to the people of Costco who stand in the aisle staring aimlessly.

Mike says that in society there seem to be high achievers and low achievers and the gap is widening. There is no longer a middle ground. They are now silent and don't speak up.

Mike talks about how people frustrate him because they complain about their elected officials, even claiming they will vote them out, only to wind up voting them in again and again and again. Torya agrees and says that this is why there are reelections…so you can vote someone out who isn't doing their job.

Mike talks about the Cypress School Board and how years ago they had to close down two schools and yet they went the extra mile to make sure everyone had a say in the matter. They held two meetings per locations before making the decision. They didn't just make their minds up on a whim.

Torya discusses how transparent some cities are because they publish the stipend paid to the council members on their site.

The discussion goes into how people vote and why.