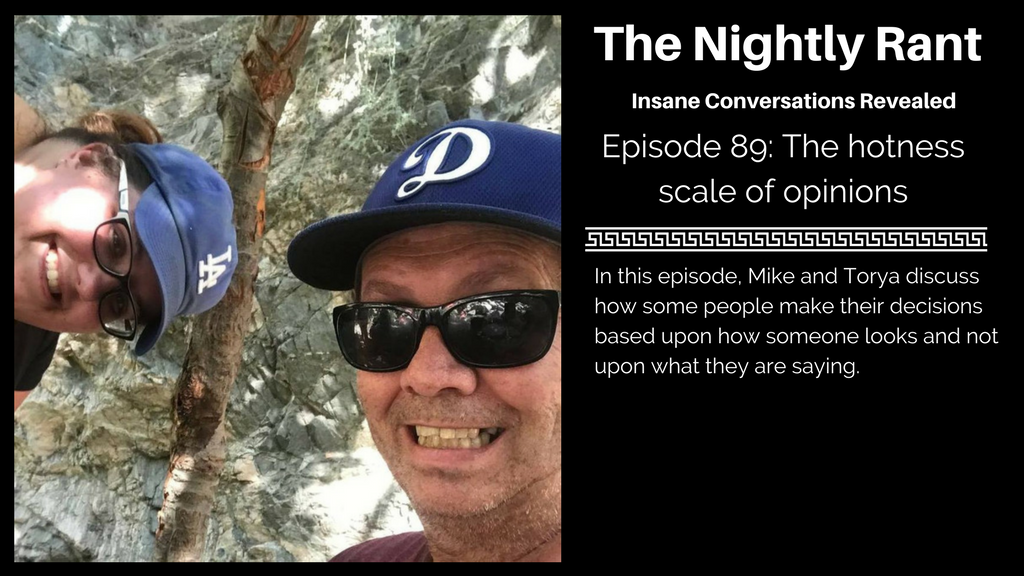 In this episode, Mike and Torya discuss how some people make their decisions based upon how someone looks and not upon what they are saying.

Listen to The Nightly Rant Episode 89

Mike claims they pick topics at random. Torya says it isn’t because all they have encountered is Honky McHonkerson–people who overuse their horn.

Torya mentions a guy they saw in a blue car who almost T-boned another car and then honked at them for being there. Mike says it is all about entitlement.

Torya makes Mike wait to rant about entitlement. She mentions people in the junior high parking lot who think honking makes you disappear. She rants about their stupidity.

Mike then goes on a rant about entitlement. Rules don’t apply to most people in their mind. Society has segments. There are people who believe anything anyone tells them. They base their opinion on who looks the best.

Torya says to email the show and she will send you Mitchell’s joke.

Mike gets back to talking about people who pick their opinion on the hotness scale. He admits to losing that battle.

Mike talks about people who continually tell you they are entitled to their opinion. He is confused because they make it very clear they are allowed to express their opinion, but as soon as Mike expresses his opinion he is called a troll.

Mike then mentions parents who are drunk at sand soccer and yell and scream at everyone for any reason.

Mike mentions how he has rethought so many things and yet still sees things mostly the same way. He mentions his former lack of empathy in the past.

Torya talks about drinking age and mentions marijuana in that same vein. Mike says he would rather his kids wait until they are full developed before smoking marijuana.

Survival of the fittest–that’s why adults need to be treated as adults.