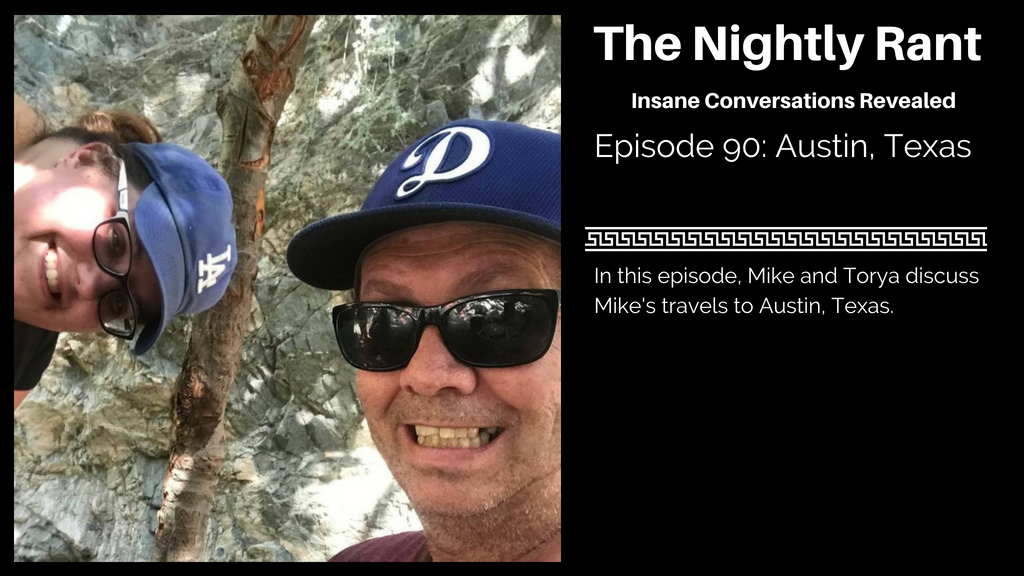 In this episode, Mike and Torya discuss Mike's trip to Austin, Texas and the first time they've done the show from different locations..

Listen to The Nightly Rant Episode 90

Mike is in Austin, Texas while Torya is at home. This is the first time they've ever done the show from separate locations.  Shout out to Ringr for their awesome technology in allowing the show to be recorded from separate places.

Mike describes arriving to the airport and the people who crowded the small Long Beach Airport. He explains that he sat on the end of a row waiting for boarding time. He had to get a seat assignment, so he got up and left his stuff and got his seat assignment. He comes back and someone is sitting in his seat.

Mike then describes the bottleneck trying to get on the plane because people with child seats were blocking the row as they struggled with their luggage.

Torya then proceeds to discuss a woman she encountered at Alyssa's awards ceremony. Torya was sitting in the bleachers that were 50% full. A woman sat in the row in front of her and sat back, using Torya's legs as her chair back. A discussion ensues about this topic.

The NHL playoffs then become the topic of discussion. Mike let's Torya know that only 3 teams have ever made it to the conference finals in their initial year of existence. He also notes that each time it has happened there has been a 50 year gap.

Discussion turns to Yogi and how depressed he has been since Mike left town.