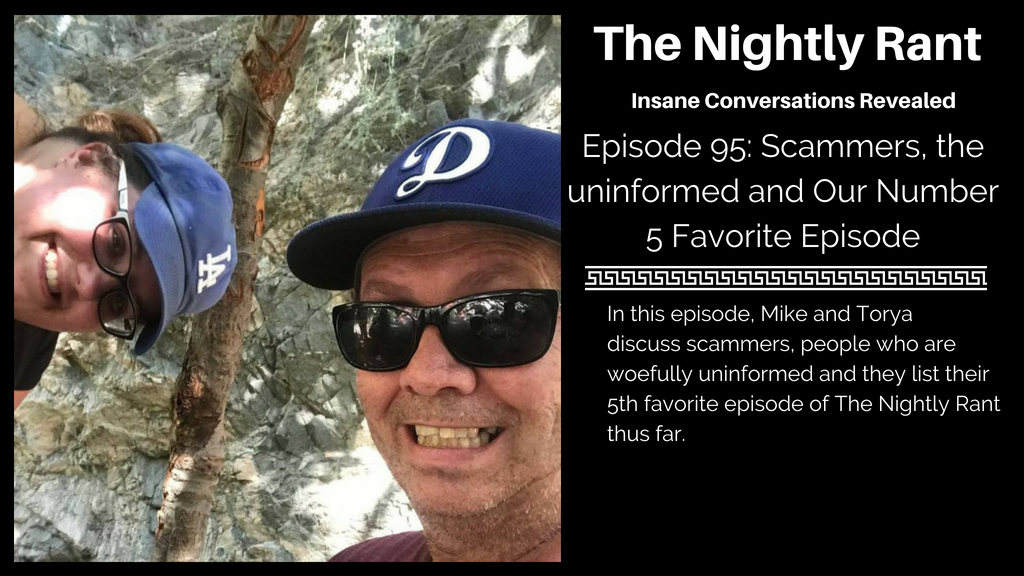 In this episode, Mike and Torya discuss scammers, people who are woefully uninformed and they list their 5th favorite episode of The Nightly Rant thus far.

Listen to The Nightly Rant Episode 95

Torya  and Mike then have a good time teasing each other about the topic today. They promote the 100th episode contest. Just say hello to Parker the Cat in an email and tell them your favorite The Nightly Rant moment that is 2 minutes of less in length.

Mike says that the thing bothering Torya also bothers him, but from a different perspective.

Torya explains she gets irritated when someone lies to her. She's been looking for a virtual assistant based in the USA to off load some tasks to them. She then posted on Upwork and invited every single freelancer in the US and Canada in the correct price range. Mike says he is proud of Torya for admitting her mistake. People begin to respond and she begins to notice some red flags. One guy makes $8 an hour and lives in Downtown Los Angeles and his grammar was atrocious. How did she determine if this guy was legit or not? She created a bit.ly link to the website for The Web Scientists. When the guy clicked the link, it shows her that he is actually from Nigeria. When Torya accused him of being from Nigeria he never answered her again. She then had someone who said they were from Northern Ontario and they were really from Bangladesh. One got crazy and began begging for work.

Torya explains that she has some very specific tasks that require a US IP address and smaller, cheaper VPNs don't work. Torya explained to the guy that she couldn't work with him because he'd lie.

Mike then talks about how AI has improved tremendously. This has given rise to bots that can easily fool you into thinking they are real. He says that when you ask certain questions the bot gets tripped up.

Torya gives a tip–if you want to find out if they are bots or not, ask two questions at the same exact time. A bot will only answer one of the questions because they are programmed to look for and answer questions. She discusses other interesting ways to defeat a bot.

Mike then says that people have a signature way of speaking. Torya says Mike's weird online quirk is capitalizing words to give them emphasis. She says it is a weird quirk. Mike says he tries not to do it.

This leads to a discussion about Facebook allowing bold and italics in their comments. Mike points out that Facebook has a rich text editor, yet those basic features are missing.

Torya says that Facebook also needs to have private support. She wants to be able to ask questions without the entire world seeing them.

Mike says they could keep it private and still use your post without your name to provide a knowledge base to other customers. Mike says he believes they keep it public because it brings other people to the forums so they can grab their data as well as registered users data.

Mike transitions to the trolls of the internet and how annoying they are. He says so many people just don't know what they are talking about and then become a troll by claiming they've answered the questions when they actually avoided the question.

The Number 5 Episode of The Nightly Rant

MIke's favorite episode is TNR80: The Circus Wants a Wall Built. He loves that it includes their favorite cast of characters.

Torya's favorite episode is TNR64: Not Everyone Wants to Live in a Parking Lot. She remembers someone declining an AirBNB offer and later claiming the “house” is just a parking lot.  Mike teases Torya about her comment and she defends it by saying “there is no such thing as consensus when it comes to people.” Mike opines that people come at things from a selfish angle most of the time.

Mike again mentions that he doesn't like trolls. He says he used to get angry at the trolls, but now he simply ignores them. If he doesn't ignore them he posts a GIF and says they can never figure out what he means by the GIF.

The rules for entering the 100th episode contest are changed slightly. Now you can enter by saying hello to anyone in The Zoo, but you must have the name right. It is OK to misspell the name.