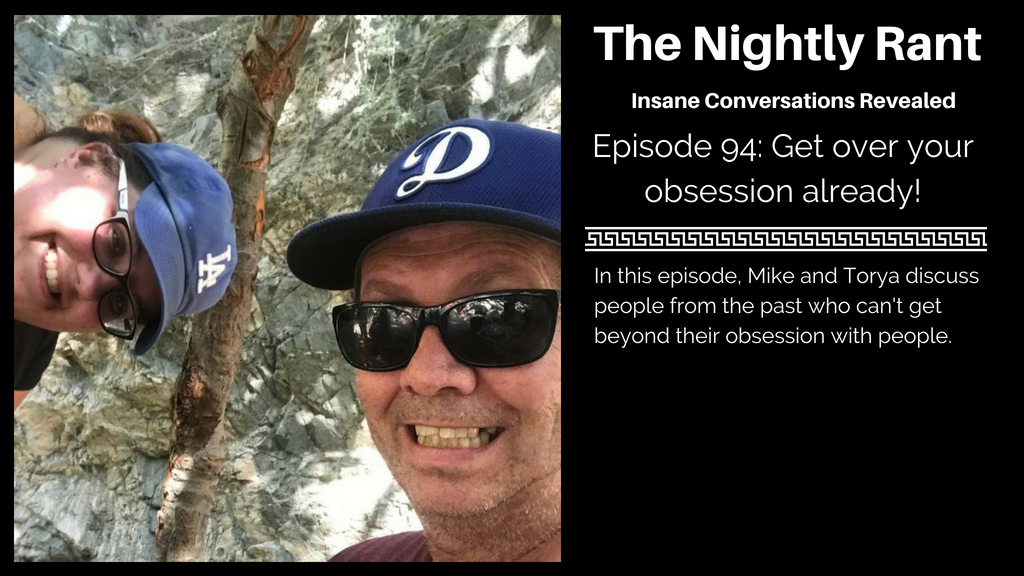 In this episode, Mike and Torya discuss people from the past who can't get beyond their obsession with people.

Listen to The Nightly Rant Episode 94

Mike and Torya agree that people never fail to disappoint. Mike says that people do change, but some people just choose to wallow in their same situation and attempt to make other people miserable. Mike also rants about the fact that people seem to think someone running for office owe the public answers on general things.

Mike finds it both sad and funny that people waste their time trolling his campaign posts. His view is that these obsessed people will lie, make up stories and say whatever they want because they think they are important because they run a group on Facebook with close to 7,000 members.

Mike discusses the fact that this group they run is very focused on what will get people removed. There are 5 different times the rules speak of getting banned. It is even in the very first sentence written by the obsessed people.

Mike then discusses how following your own rules is important. Anything less is hypocritical and apparently the obsessed people are hypocritical. What frustrates him more is people commenting things like “How does a guy running for office have time for posting on Facebook?” Why is that anyone's business?

Mike then opines that these trolls are just snakes who take advantage of the rules in a group. Mike points out that the obsessed people will kick people from their group when the person says something in another group they don't like. It is crazy! Mike says this is stupidity.

As usual, Mike begins to analyze the craziness of the issue. He says it is amazing that the people who act like drama queens and announce they are leaving a group are usually people who rarely participate in the group. He finds it amazing that something really stupid riles up people enough to make them leave. Mike says that some people react to things as though they are totally obsessed with an issue and get hurt by anything said about the issue.

Mike cannot understand why people block those they disagree with. He says it is dangerous because it leaves people with crazy ideas unchecked.

Mike tells us that the naysayers don't bother him because for every naysayer there are many more who are supporters. Supporters tend to be silent. They tend to agree in silence. Usually only naysayers speak out. This makes Mike point out how you have to focus on positive things. He feels that if he doesn't give compliments when deserved, people will not feel as motivated. This leads Mike to discuss the Love Dare book.

Mike tells a story about a job he completed and it was literally perfect, yet zero compliments.