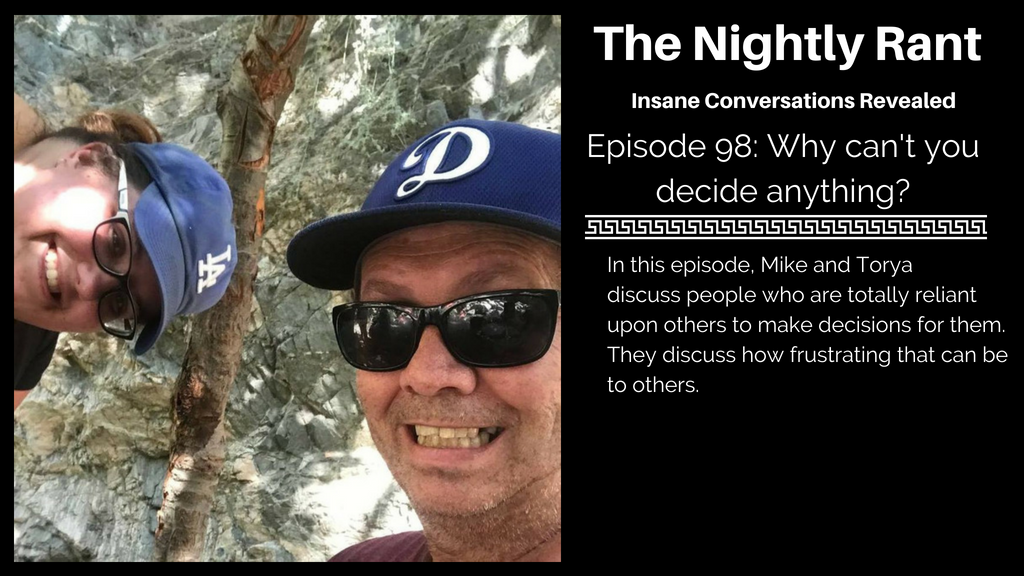 In this episode, Mike and Torya discuss people who are totally reliant upon others to make decisions for them. They discuss how frustrating that can be to others.

Listen to The Nightly Rant Episode 98

Uh oh! The show starts with an angry sounding Mike and Torya arguing about a soundcheck. They argue about the fact that Mike has not been in the habit of saying there is a problem when there is not, yet Torya still has to push back against what Mike said. Mike seems to feel she does it on purpose and it annoys him.

Mike brings up the Pope of All Websites again in this context because he says that guy can’t make decisions on his own. He asks an expert for advice. After getting the answer he takes advantage by asking the expert to handle the problem.

Torya feels people do this because they’ve been conditioned through their lifetime. Mike says he feels some of them are scamming people to get free work done for them.

Mike says that having a process will save the day. He uses the example of Hamilton, a contractor, who eventually tried to hijack some projects, but because there was a process, Mike was able to eliminate the threat. He changes their password and their role so they cannot ever reset their own password and then cause havoc.

The Number 2 Favorite Episode of The Nightly Rant

Mike likes TNR76: I don’t know, you pick. In this episode they discussed finding places to eat and how Mike cycles through locations. He likes that episode because of the open and honest discussion. He then points out that with their friend Debra, they seem to instinctively know the place they want to go. They never say it to each other, they just know.

Torya says she likes TNR47: Money, Money, Money! She says it is self-explanatory why it is her #2 episode. Mike says this episode is also #2 on the statistics for The Nightly Rant.

Mike discusses the results of his carnivore diet experiment and how successful it has been. He lost over 30 pounds, fits better in clothing and feels better overall. He is now going to change to 5 days a week of meat and carbs and then loosening up on the weekends. Mike points to his avoiding soda as a big reason he feels better.