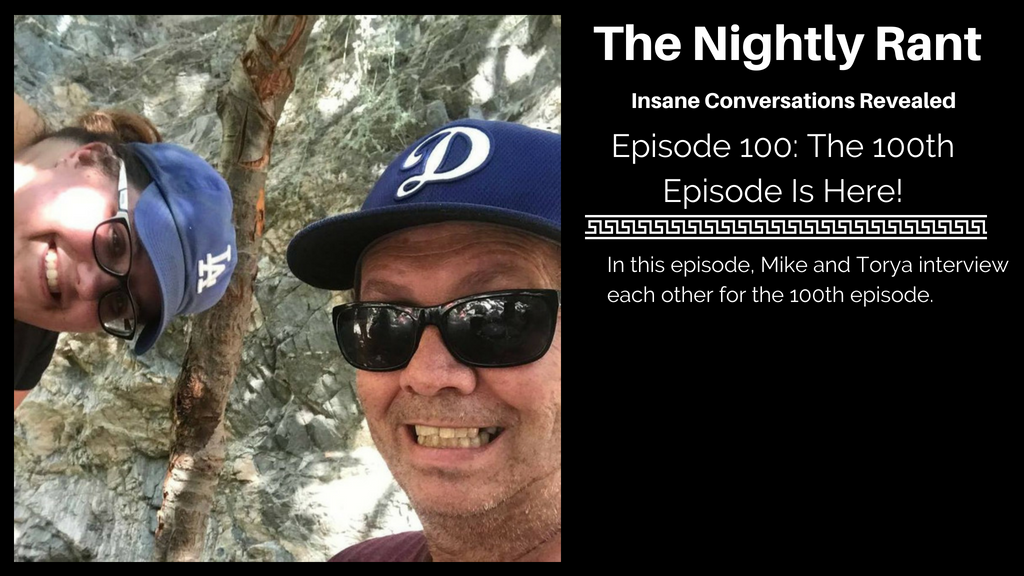 In this episode, Mike and Torya interview each other for the 100th episode

Mike asks Torya “What is your favorite part of doing this podcast?” She likes laughing, sharing their insanity with the outside world.

Mike asks “What is something you’ve learned from doing this podcast?” Torya says she has learned that Mike is more chatty at night.

Mike asks “What topics should be covered in the next 100 episodes?” Torya says perhaps adding guests to the show would be a good idea.

Mike asks “What is your favorite thing to do with your spare time?” Torya says she loves sleeping. Mike points out that she actually binge watches shows and plays games on her phone.

Mike announces the winner of the contest is Businessbacca. They did not provide their favorite The Nightly Rant moment.

Torya asks Mike “What is your absolute favorite topic to rant about?” Mike says it is uninformed people. He says these people have become his biggest pet peeve.

Torya asks Mike “What is your least favorite thing to rant about?” Mike says he doesn’t have anything he doesn’t like to rant about. Torya says sometimes she just isn’t the mood for the topic they are discussing. Mike explains the planning that goes into the show.

Torya asks what Mike thinks they can do better in the next 100 episodes. Mike says he is already working on a way to improve the sound by reducing any echo from the room. From a content perspective, Mike feels they need to be more real than they are today.