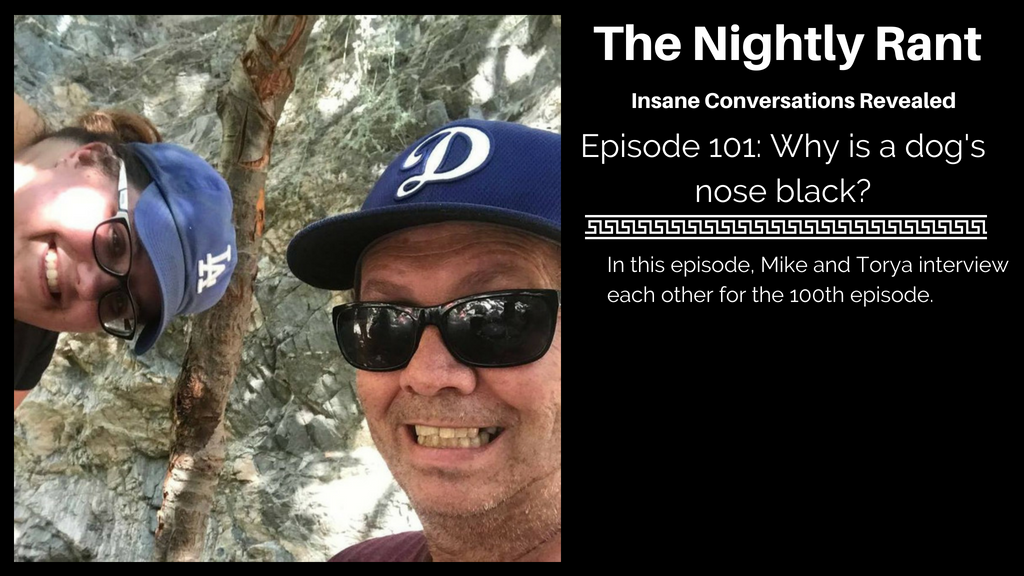 In this episode, Mike and Torya discuss dog's noses, a giant bobcat and wild animals in urban areas.

Listen to The Nightly Rant Episode 101

Mike opens with a strange question. Why are dogs' noses colored? Torya claims humans have noses that are different colors from their skin. Mike completely disagrees.

Torya expresses her displeasure with tank tops. Mike says they are to show off your muscles.

Torya answers Mike's question by saying “maybe the skin is a different type on their nose.”

Mike says that the nose is in the sun the most, so it is black to avoid burning.

Yogi says Mike is an idiot for thinking they are the same species (of course Mike didn't really think that).

Torya tells the story of her parents' dogs that got attacked by a mountain lion and only survived by working together. She points out that Yogi would become mountain lion food.

Mike explains why he is a dog person. This leads to a discussion of the personalities of the cats in the house. We learn a herd of cats is called a glaring. What an interesting word!

They then discuss potential ideas for children's books. This leads to some funny discussion.

They lead us into a big discussion about a giant bobcat that has been seen in the area. Mike explains how scary it would be to encounter that giant cat while on a walk.

Torya explains how to survive various wild animal encounters. She says that wolves are the most dangerous because you see 1, but 3 others have surrounded you.