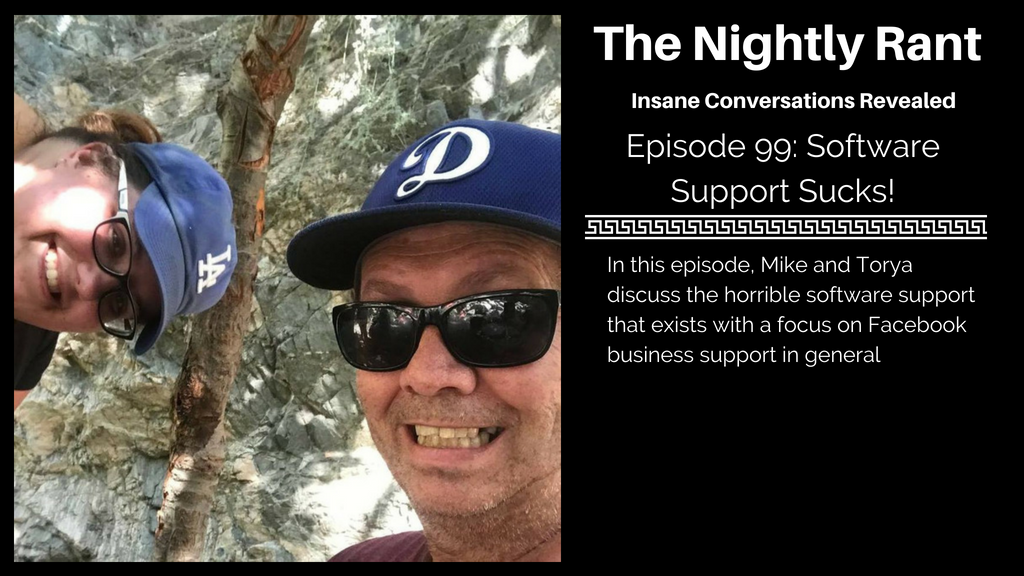 In this episode, Mike and Torya discuss the horrible software support that exists with a focus on Facebook business support in general

Listen to The Nightly Rant Episode 99

Mike says that software support is pretty much non-existent. Torya says that ClickUp has great customer service. Mike says it is the best he's ever seen in a software company. Torya makes the mistake of mentioning Intercom. Mike rants about the Intercom sales department.

Mike and Torya discuss rebranding and reselling software and how that works.

Mike mentions how licensing agreements are the best way to go. Torya talks about a device she saw on Dragon's Den where they wanted to sell their product and Kevin O'Leary convinced them that a licensing deal was the way to go.

Torya speaks about her Facebook frustrations. She has a client who rents out rooms and she uses Facebook for that purpose. Facebook disallowed her posts because she is “selling firearms” (though she's not). She puts in a support ticket and 3 months later her ticket has been closed 11 times and she still has not received any support. She then talks about how she tried to get Mike's Facebook candidate page to say what office he is running for. She put in a request in September 2017. She did it again in March of 2018 because Mike was now on the ballot and a month later it got closed with no action. A month later she began getting emails telling her what changes were needed, but one change at a time. She updated the things they requested. Still no love from Facebook.

Mike says it bothers him when Facebook changes something and people complain about the changes. He says it is a free service, so stop complaining. However, if it was a service he paid for he feels you should be able to complain. He then says that the advertising is their model. They get businesses to spend money on advertisements. At that point, the service is no longer free and Mike feels they should be getting support. Mike says that once you give money you should expect good service.

Mike complains about people who lie to get what they want. Torya says she is disgusted by people who lie to the people who trust them to get their own way. Mike says this is why people need to make up their mind about their vote on their own. If you simply listen to other people, you are giving that person an extra vote. You begin giving that person more and more power. In this case they are trying to stop the rezoning of Los Alamitos Race Track by lying. The proponent of the measure challenged the liar to show him a developer willing to pay $5 million an acre because the city has had land in that same spot since they can't get even $1 million per acre.

Mike talks about the owner's goodwill gesture of donating an 8.8 acre park for free and will be paying for the maintenance of that park for 10 years. Mike refers to the wife of one of the key opposition people who misquoted the measure. It took him 30 seconds to point to the facts that show she was wrong. Mike implores everyone to check things out to find out if they are true or not. He says not to believe everything people say.

Torya points to an article about Dana Rohrbacher. She said the headline didn't match the facts. Torya says that if your message is true you shouldn't need to lie to spread it.

The Number 1 Favorite Episode of The Nightly Rant

Mike's favorite episode is TNR28: Trash Bag Basketball. He and Torya recap the incident that lead to that episode. They both laugh as they recall the details and the aftermath.

Torya's favorite is TNR39: The Chesse was holding the couch together. Torya describes why she likes that episode. They both describe why the title was chosen.