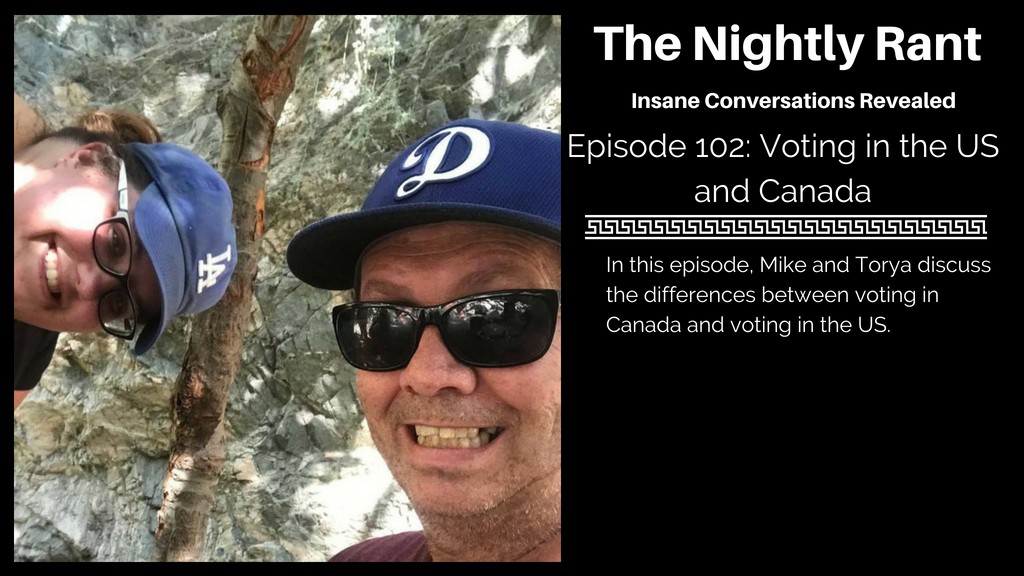 In this episode, Mike and Torya discuss the differences between voting in Canada and voting in the US.

Listen to The Nightly Rant Episode 102

Mike and Torya discuss the differences between voting in the US and voting in Canada. Torya points out that people in jail are allowed to vote in Canada, but not here in the US.

Mike suggests that one way to be able to build more prisons is to have it so all prisoners vote within the area the prison is located. This would increase the influence of that area and so people would want to have prisons in their area to get that voting power.

Mike says the Canadian approach sounds like how our Congress is elected. This inspires Mike to speak about gerrymandering. Torya says they don’t draw the lines like this in Canada.

Torya points out that there are just 2 major parties here. This limits choices. In Canada there can be 13 or more parties to choose from when voting. It gives them more diversity and enables better representation.

Torya discusses some changes that have been proposed to the Canadian election system. Mike says the changes would do away with the argument that you could waste your vote voting for a third party.

This leads to another brief discussion about the extremes on either side and how that is still bad.

Torya rants about the cost of her cell phone when she lived in Canada. Mike opines that the government is deciding upon a minimum number of competitors for each industry.

Mike opines that you must have a minimum number of competitors for the free market to truly work. He explains why companies would buy out their competition at all costs to control the entire market.

Torya says the competition is good for the consumer. She aligns this with elections and says that by having more competition it makes it easier to represent the entire population.

The two party system is a big problem in the US.

Mike says that people get too myopic about their voting. They pick a single issue and that’s what they vote on, yet the many other issues are a bigger problem and are not considered.

Torya points out that people campaign against things rather than for things.

Mike proposes that in the voter guide, the candidate should be allowed at the very least a link to a website or a Facebook page. This would solve the issue of not having enough money to put an advertisement in that book. Candidates who don’t have a candidate statement tend to get hurt in the final election. This would solve it. Torya further suggests there not be a book at all, but a website that contains the information desired.