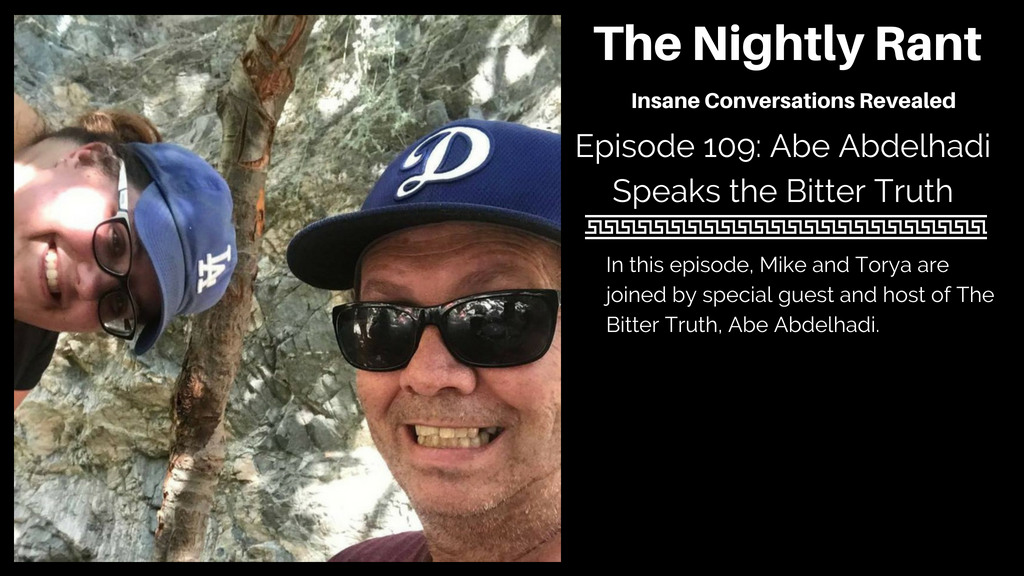 In this episode, Mike and Torya are joined by Abe Abdelhadi for an interesting conversation.

Listen to The Nightly Rant Episode 109

Today Mike and Torya welcome a special guest, Abe Abdelhadi. He asks the questions the masses find difficult. He's been a musician, comedian and put out a novel in 2015 called All Together Now. All of these endeavors have one thing in common–the desire to tell the truth.

Abe brings up Antonio Sabato, Jr. and his political career. He says that any two bit actor thinks they can run for office these days. Abe then brings up Oprah and her potential run for President of the United States. He says she was for the Iraq war so that disqualifies her in his mind.

Abe brings up the Jerry Springer aspect of talk shows on television. He feels we've been dumbed down a great deal. It is all about identity politics. Abe brings up Maxine Waters and her ethics violations. Apparently Antonio Sabato, Jr. Said she should be in jail. Abe discusses the Sarah Sanders situation. He uses that to show the hypocrisy. This leads Abe to rant about both sides of the aisle and their inconsistent behavior.

The discussion leads to the kneeling in the NFL issue. Abe says they keep flipping the argument. He compares it to his girlfriend catching him cheating because she went through his phone, but he turns it around and says she shouldn't be going through his phone. It is gaslighting. Mike points out that they continually fight about things because the left sees everything their way and the right sees it their way.

Abe lets us know how he feels about President Obama and President Bush. He says the left has allowed Trump to steal their critical thinking skills.

Abe recounts his preparation with a DNC Super Delegate. He let the person know what he wanted to talk about. Abe let her know what he thought the DNC should focus on. He points out they are losing followers because of the corporate money they continually take.

The Bitter Truth with Abe Abdelhadi