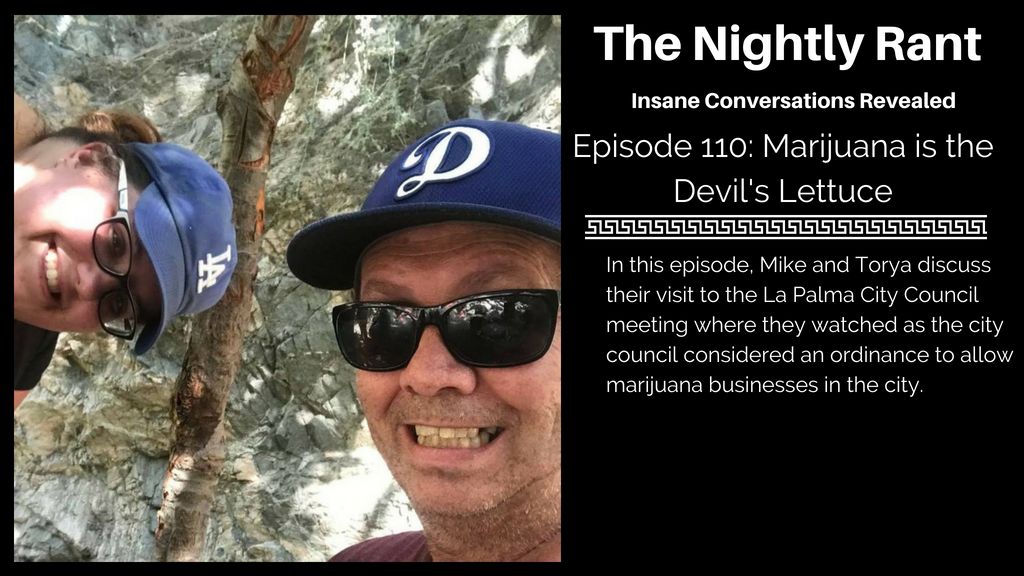 In this episode, Mike and Torya discuss their visit to the La Palma City Council meeting where they watched as the city council considered an ordinance to allow marijuana businesses in the city.

Listen to The Nightly Rant Episode 110

They are back at it! Mike and Torya headed to the La Palma City Council meeting wherein they were considering an ordinance to allow marijuana businesses in the city. This is done to get ahead of the curve on this issue. They would allow marijuana cultivation, marijuana testing, marijuana processing, marijuana packaging and marijuana distribution and online sales and delivery. No dispensaries were going to be allowed.

Mike says what they witnessed was bat shit crazy.

The social media lead up to this meeting was intense and full of crazy negative comments. The opposition advertised for an entire week to get people to come out to this meeting. Mike had suggested a good reason to approve such an ordinance, but the opposition strictly dismissed Mike’s argument with no real response at all.

The City of La Palma gave an unbiased presentation. They took the time to respond to the comments from social media. They responded directly to each social media post. As usual, there were a bunch of comments, but they were all about the same exact topic.

Mike points out that a woman stood up and complained that people from other cities would be coming to La Palma to buy marijuana despite the assurances there would be no store front sales of marijuana allowed by this new ordinance. The people contended that the city only wants to pass this ordinance so it can give city staff a giant raise. Torya points out that the City Manager and her staff are the same as any other employees at any other company. They are allowed to ask for a raise. In fact, Torya is pretty sure the raise would be the same with or without the marijuana income.

One man stood up and talked about his own addiction to pain killers and how medical marijuana has helped him a great deal.

Mike points out that these are the same people who call people “bully” online, but they are the true bullies. They not only make negative comments online, but they go to meetings and demand that things be done their way. One guy was demanding they move on to the public comments. The mayor put him in his place. Despite the place being packed, maybe 12 people spoke total.

Torya points out that people at these meetings attempt to whisper, but they are so loud everyone can hear what they are speaking about. Mike observed that the mayor knew most of the speakers, which leads Mike to believe they are regulars.

Mike says the people are crazy when they demand to vote on things like this. They voted for the City Council to represent them and then when something is controversial they want to vote on their own. It can’t be both ways.

Mike rants about representation and how it is supposed to work. Sometimes issues are not black and white. There can be more than one “right answer” to a problem. Just because they choose an answer you don’t agree with doesn’t make the answer wrong.

Torya recounts an interaction online with a woman who was misleading others about the meeting. This woman expected Torya to know she was speaking from information someone else gave rather than on her firsthand knowledge. They expected Torya to know this. They took the conversation to private message. In this woman’s opinion, if you don’t own a home, you don’t get a say.

Mike explains his take on home ownership vs. renting.

Torya says that her interaction with the woman online was apparently quite frustrating to Torya.

They discuss people who are uninformed and vote vs. people who just don’t vote. They agree both are just as bad.

Mike explains why he doesn’t think people should vote based upon what other people tell them. People want to yell at the food the chef screwed up rather than yell at the chef. Torya feels that if people are not making informed decisions, democracy is a lie. Mike points out the current outrage at Trump. He is just a figurehead in reality. He is the CEO of the Executive Branch of government. He doesn’t make laws, he influences the creation of laws. Congress and Senate make the laws. They do this without term limits and if you don’t like how things are going, vote them out.

Mike feels representatives need to attend events in their area and then return to Washington DC and actually represent the needs of their constituents. Rather than looking at the policies and blaming the policies, people point fingers at the leaders. Torya says maybe people should realize their own lack of knowledge and then fix the problems.

Torya brings up the people who are upset that children are being separated from their parents at the border. She says they should get organized and do something about it. Mike says that for every issue there is a bus and people need to get on the bus that bothers them the most and change things.

Mike points to his own election experience. He got over 15,000 votes and is going to continue pushing his agenda.

Mike points out that people think those who yell the loudest win, but that isn’t the case nor does it make the loud people right.