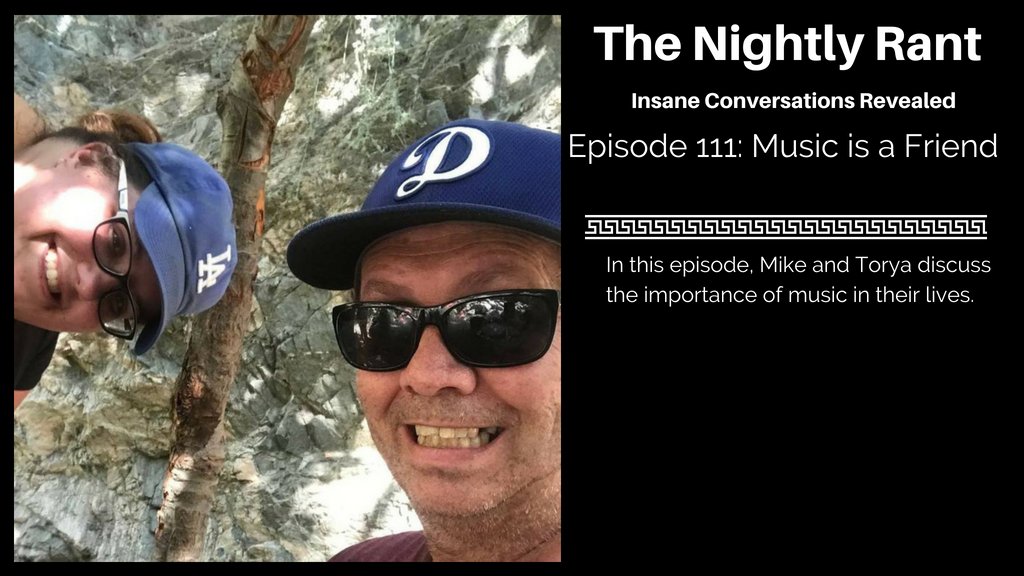 In this episode, Mike and Torya discuss the importance of music in their lives

Listen to The Nightly Rant Episode 111

Mike and Torya spent the evening talking to Ken and Nancy, two new people they met. Mike says they look like a Ken and a Nancy. It made Mike realize how important it is to make friends with like-minded people. There are people in your life who don't really know what is going on in your life.

Mike asked for the Top 5 Albums that still speak to you today. Torya says she can only mention artists, not albums.

Mike says that music is like a friend–it makes you feel a different way each time you listen to it. Mike wonders if mood drives music or does music drive the mood? Torya says mood drives music for her. Mike says he listens to mostly playlists. He says that he starts out in one mood and the playlist will change his mood. Mike concludes that music changes the mood–it isn't something you can argue with.

Mike complains that Spotify shuffle play doesn't work at all. He says it is ridiculous. Torya defends them by saying she sorted the playlist and then it worked. Mike points out that if she had to organize the playlist, shuffle play isn't working right. Torya points out that her iPod Nano had amazing shuffle features. Mike wonders why Spotify can't make their's work.

Torya tells the listeners to use Spotify Family if they are paying for multiple Spotify accounts. Mike points out that music services are all about what people are the most used to.