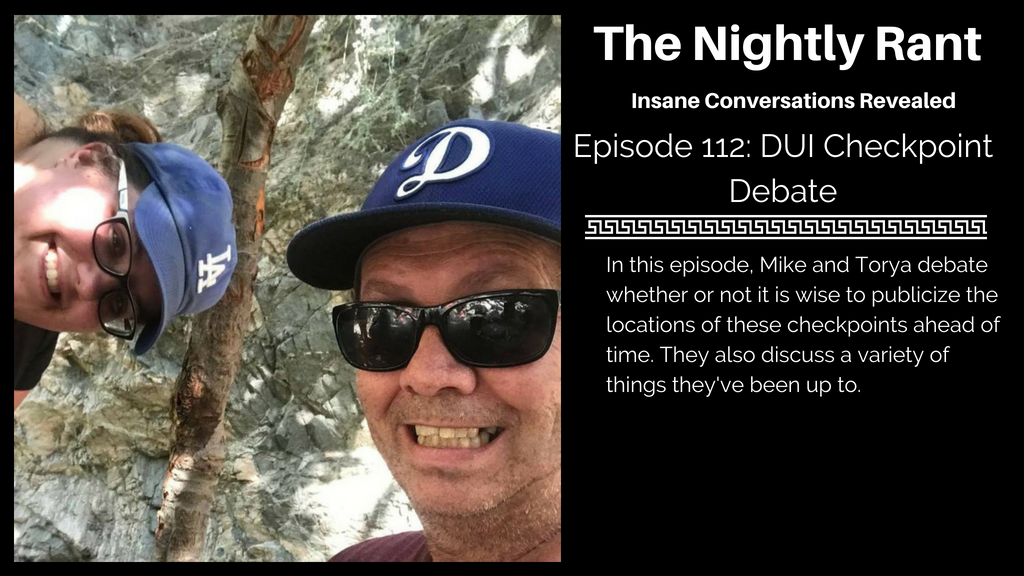 In this episode, Mike and Torya debate whether or not it is wise to publicize the locations of these checkpoints ahead of time. They also discuss a variety of things they've been up to.

Listen to The Nightly Rant Episode 112

The show opens with Mike explaining that Torya says things that really make him think. She wants to know what she said this time. He then discusses the unreasonable search and seizures and DUI checkpoints. He compares what she said about Canada and how it is handled here. He says he has learned to listen to her, identify what he doesn't understand and then discuss it.

Torya says she doesn't think it is right to force the police to publish their DUI checkpoints. Mike says he can't remember the reason why (NOTE: It is because a DUI checkpoint can create an illegal detention). Mike explains that checkpoints are very invasive here versus Canada. Torya says she still thinks it is stupid. Mike explains they need cause to stop you. She asks when can you be pulled over. Mike lists a bunch of reasons and explains why those reasons exist in the first place.

Torya argues that publicizing a DUI checkpoint renders it useless. She thinks it is ridiculous. Mike says Torya is just being emotional with her argument. He says it is as simple as this–are your rights being violated or not? He points out that saying “it is stupid” is an emotional argument.

They then argue about whether or not Torya is actually listening. Mike points out that she can't repeat what he is saying to any level of reasonableness, therefore, she hasn't been listening. He asks what percentage of accuracy would be required to claim you're listening? Torya is feeling especially feisty today.

They transition to a discussion of racist apartment neighbors. That leads to a discussion of the World Cup. Mike is amazed at how skilled the players are. Torya has noticed that the professionals are using the same system as Mitchell's team, but they are much more accurate with their kicks. Torya points out that she has noticed how much the youth team has improved over the past 2 years.

Mike says that professionals at anything always make what they are doing look so much easier.