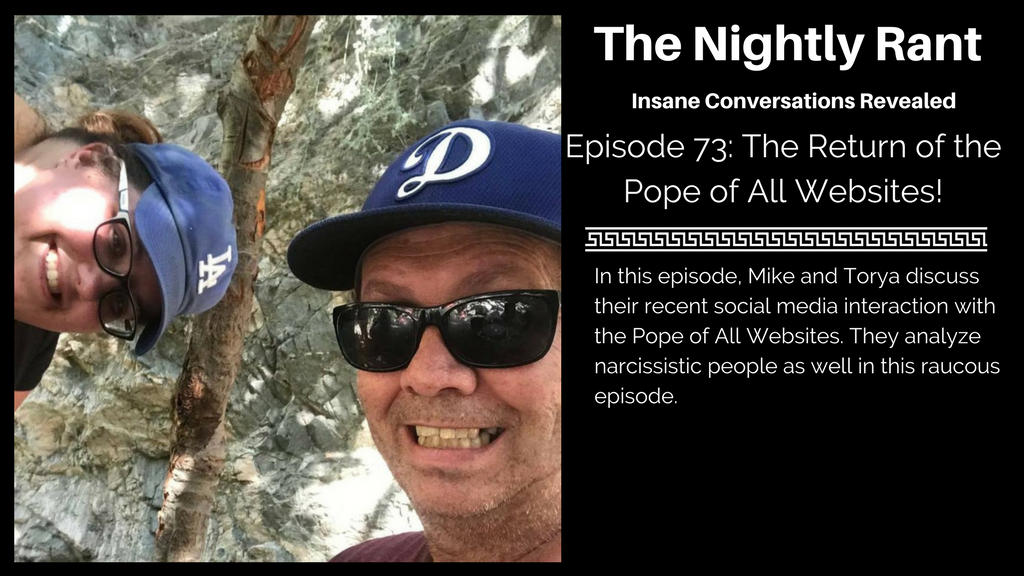 In this episode, Mike and Torya discuss their recent social media interaction with the Pope of All Websites. They analyze narcissistic people as well in this raucous episode.

Listen to The Nightly Rant Episode 73

Mike begins the show talking about the return of the Pope of All Websites. He reads a message where the guy says he was planning to shut down his sports oriented site because he wasn’t making any money there. He then went online claiming that being booted from Mike’s server has brought him close to being homeless. Mike says that he is sincerely worried that this guy has Alzheimer’s disease (something that runs in his family). The final conclusion is that the guy is narcissistic.

They discuss blocking this guy on all social media because he is clearly nothing but trouble, which is why they got rid of him in the first place. The spin he puts on this is funny though. He claims Mike is drunk all the time (nice libelous statement, right?). He fails to take any responsibility at all for his actions.

Mike recounts a discussion he had with the Pope of All Websites about reporting tools for SEO. Mike was researching good tools and heard that the Pope was doing some SEO, so he asked. It turned into a huge argument because the Pope took offense.

Mike says it reminds him of people on Facebook who get upset because you don’t agree with them, bow down to kiss their feet, etc. There is a group of people that only believe the story THEY craft.

Mitchell explains what Mike’s joke meant. Even a teenager gets it.

If you don’t know how to do something, you can find people who know how to do things for you, but don’t expect them to do it for free. You have to take care of your own business. This leads to a discussion of the book Crushing It.