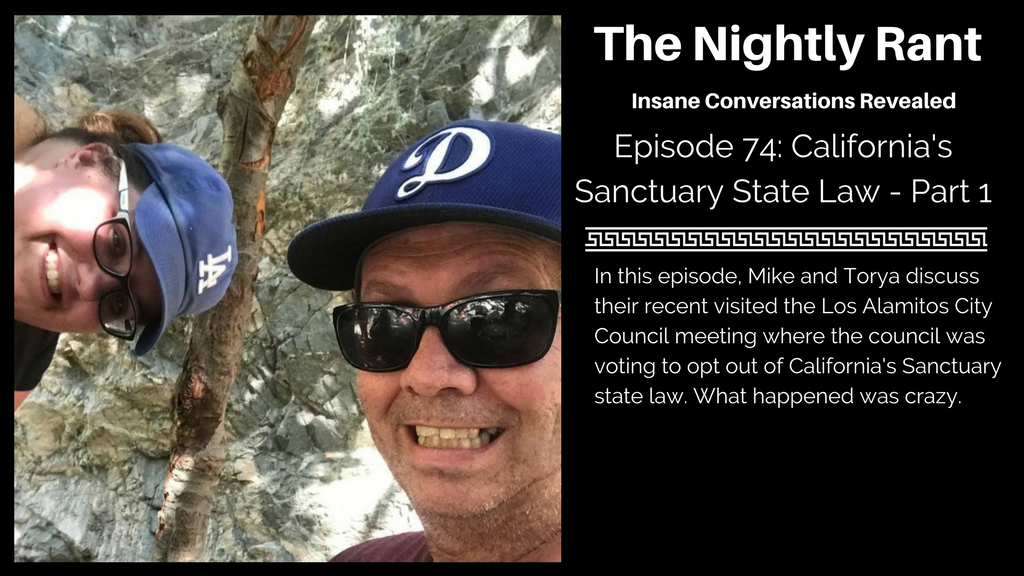 In this episode, Mike and Torya discuss their recent visited the Los Alamitos City Council meeting where the council was voting to opt out of California's Sanctuary state law. What happened was crazy.

Listen to The Nightly Rant Episode 74

Mike and Torya went to the Los Alamitos City Council meeting wherein the council was determining whether or not to opt out of California's Values Act, better known as the Sanctuary State law.

The place was overflowing with people and Mike and Torya question the logic of using a site that was too small.

Torya describes seeing the extreme people from both sides. Mike talks about the Mike Pence lookalike that was present. She discusses this woman who was very belligerent towards everyone. Mike says he admired her for standing firm on her stance.

Both sides were very passionate. They wanted their side to come out on top.

Torya describes one guy who wants everyone deported who were not born in the country. She then talks about this nice reporter

Mike made friends with several people at the meeting. He was able to talk to people from both sides. He also met Aaron, a reasonable guy who was opposed to the ordinance the council was attempting to pass.

They then discuss Purvey Racist Santa who insulted so many people at the event with his racist attitudes. Mike confronts Racist Santa and was told HE was a racist.

“You're a human, he's a human and she's a human, so start acting like a human being!” — Mike

Fake Mike Pence came to the defense of Racist Santa. He touched Torya and so Mike stepped up to him and Fake Mike Pence backed down and looked fearful.

What Mike and Torya learned is that people seem to think that if they are the loudest, they are right. What's funny is the feisty woman took a video of the entire altercation Mike had so that the guy could not lie about Mike.

Mike says people need to take the time to learn other people's perspective on things in order to gain respect for them.

Part 1 ends with a discussion of how insane Fake Mike Pence is.

Part 2 will be available at http://yogispodcastnetwork.com/tnr75