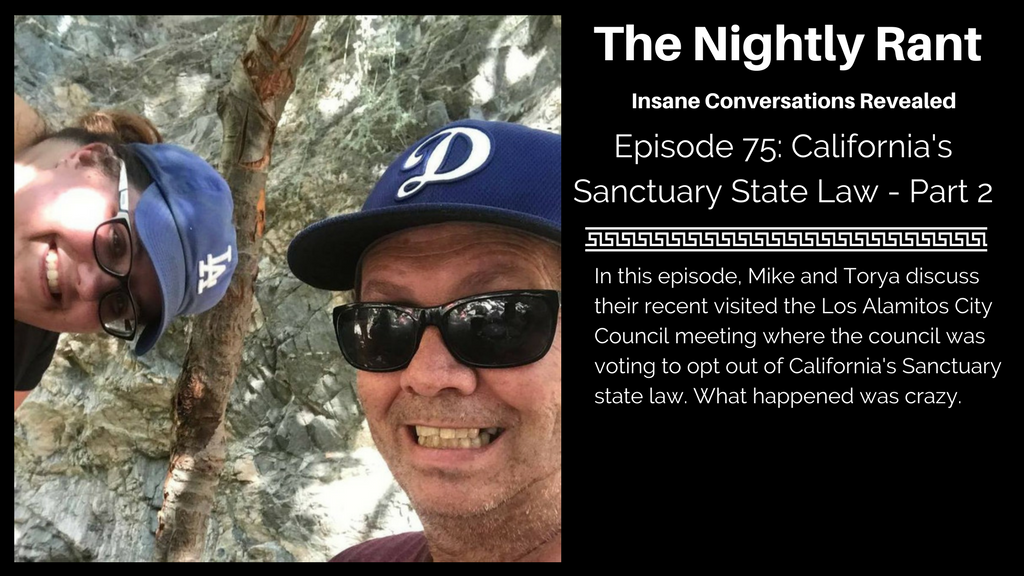 In this episode, Mike and Torya discuss their recent visited the Los Alamitos City Council meeting where the council was voting to opt out of California’s Sanctuary state law. What happened was crazy.

Listen to The Nightly Rant Episode 75

Please note that the first part of this episode is at http://yogispodcastnetwork.com/tnr74

The story of the Los Alamitos City Council meeting continues as Mike and Torya recount the interaction with Fake Mike Pence.

The two had a crazy laugh that Fake Mike Pence called Mike a “weirdo”. Mike was dressed in business attire and got called a weirdo!

Torya asks that Fake Mike Pence write in for a continued dialogue since he ran from the meeting.

Torya then shares the story of the Asian man with a thick accent speaking. The side in favor of the sanctuary state laws immediately began to call him racist names UNTIL they realized he was on their side.

Mike then says that Operations Captain Chris Karrer was amazing and so was the rest of the Los Alamitos Police Department. They did an amazing job!

Mike talks a bit about his interaction with Aaron, the college aged man who was on the side of the sanctuary state law. He explains that the Captain had so much control over the situation without being a controlling idiot. He handled things perfectly. He let people do their thing.

As they left the meeting they had yet another encounter with someone against the sanctuary state laws. She proclaimed she wanted all laws enforced no matter how small the violation all while illegally smoking a cigarette. Mike discussed some things with her and then they both left the meeting together.