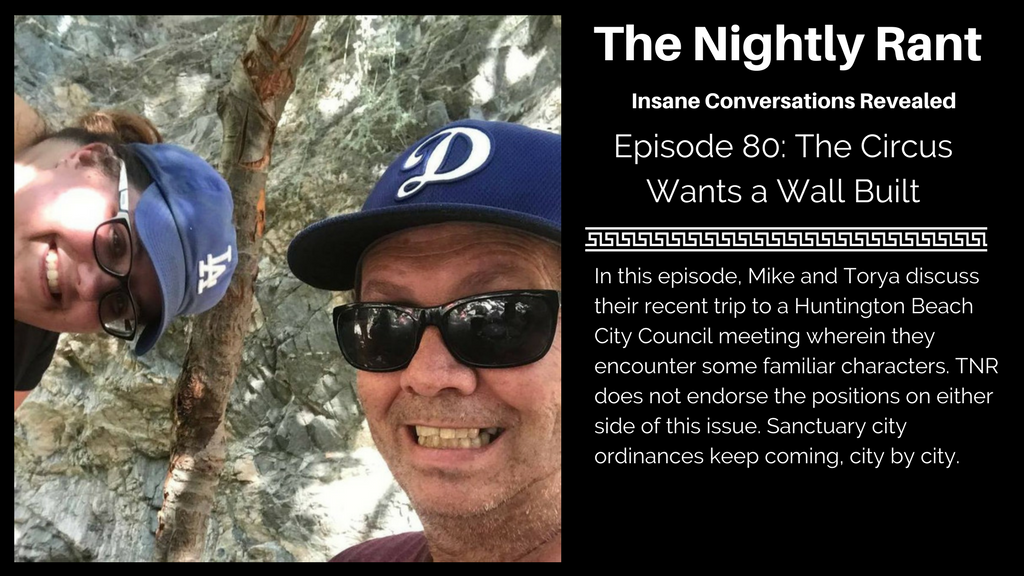 In this episode, Mike and Torya discuss their recent trip to a Huntington Beach City Council meeting wherein they encounter some familiar characters. TNR does not endorse the positions on either side of this issue. Sanctuary city ordinances keep coming, city by city.

Listen to The Nightly Rant Episode 80

***WARNING: EXPLICIT LANGUAGE IS RAMPANT IN THIS EPISODE***

The show opens with chants of “build that wall” as heard at the Huntington Beach City Council meeting. Mike and Torya then breakdown the circus that is back in town. The last time we saw them was in Los Alamitos (Episode 74 and 75), but thi s time they are joined by a new clown. That clown's name is Dana.

Mike talks about Supervisor Todd Spitzer and how his comments are leading to vigilante justice against the homeless. That's why they are not going to reveal the actual names of the circus members. At the same time, public officials can and will be named.

They play the words of Congressman Dana Rohrabacher. Torya thinks it is crap that he not only went first, but got an entire extra minute to speak. Mike says they were simply trying to show him the respect his position deserves. Under Sheriff Barnes spoke after Dana. He supported the idea of opting out of the sanctuary city laws. Mike says that he is also annoyed that Dana was granted longer time than the rest of the people who spoke and that is wrong.

Mission Viejo Guy is the next person they talk about. The guy allegedly rode a bike from Mission Viejo to Huntington Beach. It is a 35 minute drive with no traffic in a car and is 39 miles.

Guy From the News is the next person they discuss. He goes from meeting to meeting and stirs up trouble at all the meetings he attends. He is clearly there at the behest of someone who wants to remain anonymous. Do you think he sounds a little rehearsed?

Our great friend from Los Alamitos was present. She is called Smoker Lady. She is the one who argued with Mike and screamed at him at the end of the Los Alamitos City Council meeting.

Torya says she is not a religious person. Her own mother asked her if she burst into flames when she entered church. She has a serious issue with the people who were giving the rabbis a hard time while they spoke.

Smoker Lady brought the numbers. She probably had fake numbers, but she brought numbers nonetheless. Mike says she copped out when she said that she wasn't a math expert, easily deflecting any possibility of accepting responsibility for mistakes.

Mike discusses how these people see each other as “the opposition”. Mike discusses that it is more important to collaborate and not to compromise because compromise infers things were given up. Collaboration means both sides agree to the solution completely. Mike talks about how it seems people just want to win.

To wrap it up, they discuss some positives and negatives taken away from the situation.

Mike says one thing that makes the system great is that people are allowed to address their government officials. Another thing Mike sees as positive is just understanding how influential and powerful people can be if they come together around a common cause. Torya says one positive is that the people were educated on the issues. She respects people who took the time to be informed about what they were pissed off about.

Mike says that a negative is that when people are empowered, the racists also become emboldened. Torya has two negatives. The first one is they let people talk who were not from Huntington Beach. She disagrees with that. She also doesn't like that people spoke over the top of those who had the floor at the time.