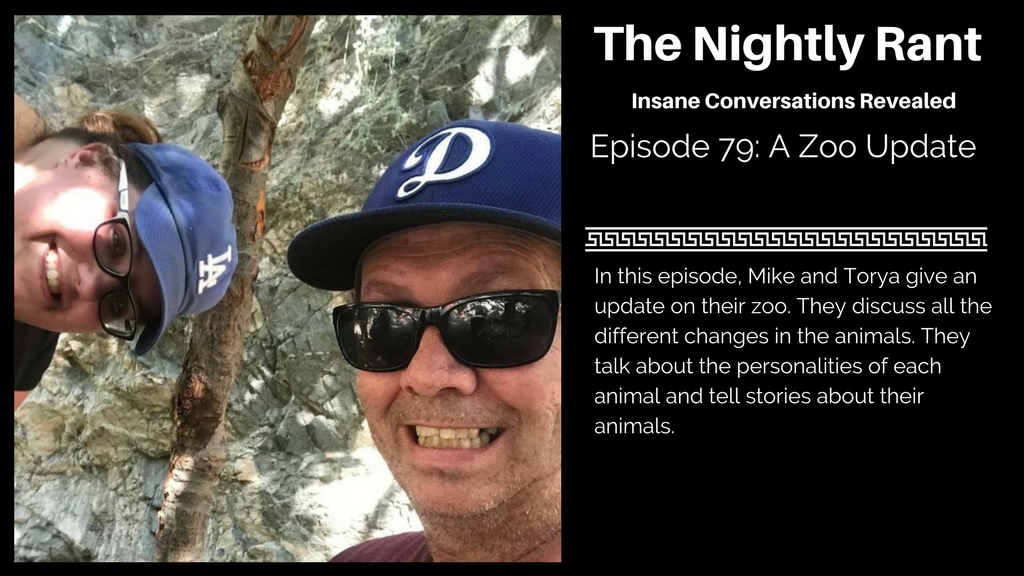 In this episode, Mike and Torya give an update on their zoo. They discuss all the different changes in the animals. They talk about the personalities of each animal and tell stories about their animals.

Listen to The Nightly Rant Episode 79

Today's episode is all about The Zoo.

Yogi has been trained to walk off leash. He loves his freedom. Mike says that now Yogi takes advantage of no leash by sniffing certain plants forever. Yogi still has separation anxiety. He doesn't like when anyone leaves.

Pretty Girl is much more friendly. She plays with Olive. They romp around like crazy. However, her latest thing is abusing Parker.

Apparently, Parker went through a phase where he would start fights with the girl cats. The phase passed, but now it is flipped and Pretty Girl is harassing Parker. She will bop him in the face with all claws out.

Parker has claw caps on him because he destroys the carpet and the furniture. Mike says that Parker is extremely affectionate. He just suddenly decided he likes the people of the house. Parker makes his own spot wherever anyone is sitting. He will sit on top of you if you let him.

The four guinea pigs are doing great. They are getting along.

There is one fish that died and was replaced with a new fish.

The hermit crabs had tragic issues. 2 of them passed away. We only replaced them with 1 more and that's only because they say hermit crabs must have a partner.

The outdoor contingent now only consists of Mr. Fluffy Orange. Fluffy loves Torya. He is super smart. When Mike and Torya tried to catch him to get him adopted, he got away and he is so smart that he wont' go near anyone with bags. Poor Fluffy was a house cat who escaped while his owners were moving. While the owners left a note about the cat, they've been contacted and never returned for him.

Mike discusses that he has been super busy and it has changed Yogi. Yogi has become very clingy. They then discuss how Yogi has many neurotic traits.

The discussion turns to the possibility of rebranding that Instagram to a Zoo themed Instragram.

Torya has requested that all listeners send pictures of their zoo as well so she can see. Send them to info@yogispodcastnetwork.com.