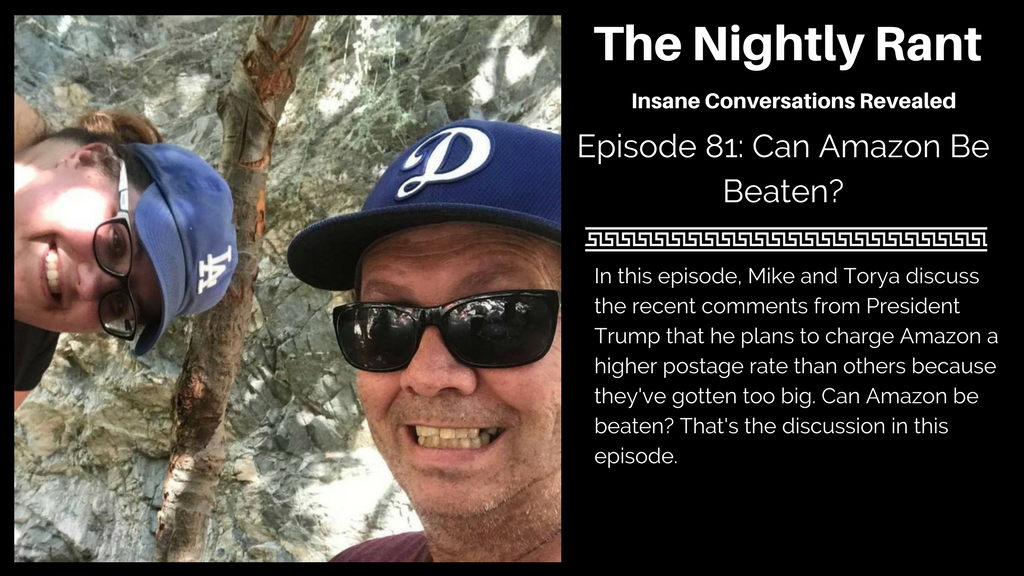 In this episode, Mike and Torya discuss the recent comments from President Trump that he plans to charge Amazon a higher postage rate than others because they’ve gotten too big. Can Amazon be beaten? That’s the discussion in this episode.

Listen to The Nightly Rant Episode 81

Mike talks about his free MLB Premium subscription from T-Mobile Tuesday. The app is now broken after applying the freebie.

Torya discusses how she got a free magazine subscription from T-Mobile Tuesday.

Mike opens up a discussion about how Trump claims Amazon is going to be paying more in postage fees. They discuss why it is probably a bad idea, but that Amazon had anticipated this move a long time ago. This is why they began their own shipping company to deliver on their own.

Somehow they wind up talking about businesses failing. Mike recounts the pre-Amazon company called The Big Store. He explains they messed up by missing the cultural issues in various countries. They posted web content with colors that meant death in other countries which scared off people from shopping there. Torya states how she sees Amazon’s growth as something quite natural. Both agree that Amazon bought Whole Foods to buy the distribution network.

The discussion switches to whether or not Amazon could ever be beaten. The consensus is that companies can beat Amazon in certain areas, but not flat out beat them. They will have to do something special, but they can beat Amazon in specific areas. Walmart offers their savings catcher, which Mike says encourages him to shop at Walmart because he knows he will get the best price on groceries.

Mike and Torya agree that increasing postage for Amazon will not hurt Amazon, but will hurt the small businesses that use Amazon as a selling platform.

They then wonder why Audible isn’t done like Spotify where you get everything available to you for one low price. After all, Amazon has Kindle Unlimited, which is similar to Spotify, but for books. It makes no sense that Audible is so expensive and gives you just one audio book.