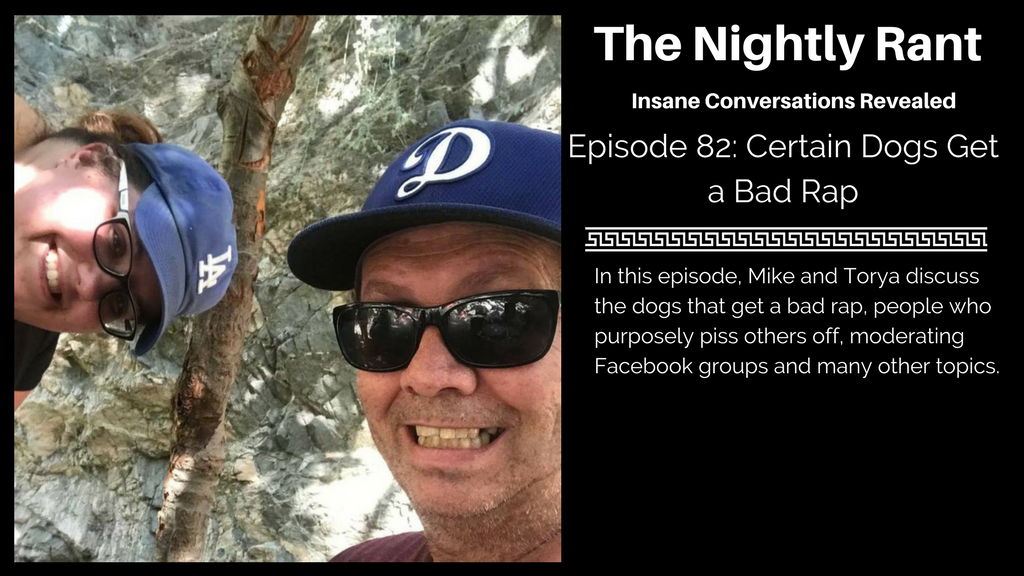 In this episode, Mike and Torya discuss the dogs that get a bad rap, people who purposely piss others off, moderating Facebook groups and many other topics.

Listen to The Nightly Rant Episode 82

The show opens with a discussion of dog breeds that get a bad rap. They point out that it is the owner that is the problem.

Torya describes how someone in the building is encouraging his dog (a pitbull) to lunge at one of the stray cats in the building. The owner attempts to cover it up when he is seen, but it is obvious what he is doing.

Mike attributes the difficulty in finding an apartment that will take dogs to people who don’t teach their dogs to act properly. The owners of these dogs use their dogs to threaten other people. They let their dogs crap wherever.

Torya agrees that Mike is an extremely loyal person. He will cut you off if you cross the boundaries. Torya says his boundaries are the same for everyone and Mike agrees.

Mike talks about how people want to insult religious people on purpose.

Mike talks about moderating Facebook groups and the best strategy for that.

Mike discusses the Libertarian page he is a moderator for and how busy it is.

Mitchell ran his mile in 5:42, which was a personal record.