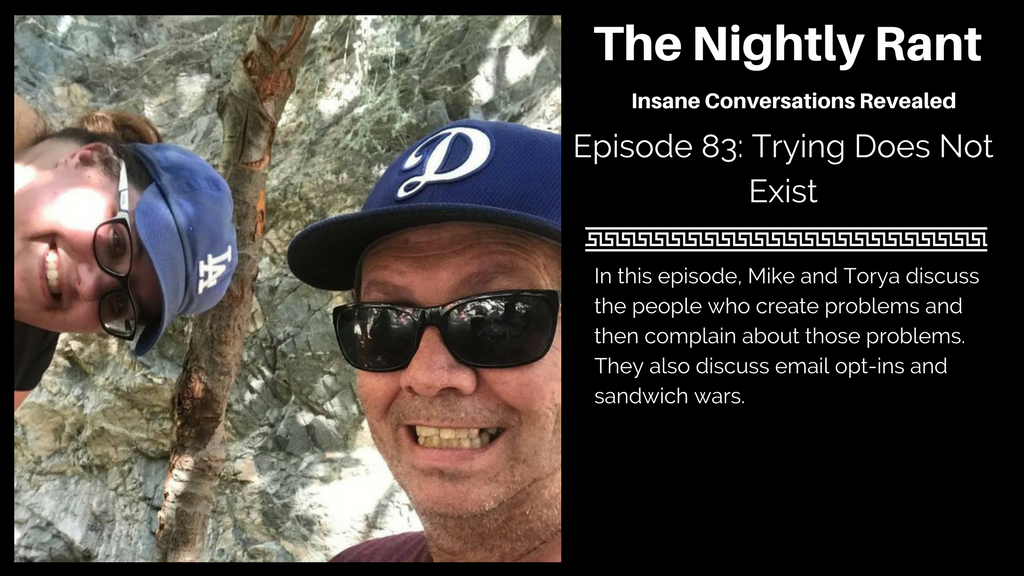 In this episode, Mike and Torya discuss the people who create problems and then complain about those problems. They also discuss email opt-ins and sandwich wars.

Listen to The Nightly Rant Episode 83

Mike is starting the show extremely amped. He says he loves the way the show goes when he is this way.

Torya asks when it was considered OK to live with a bunch of people, create a mess and then complain about ants. Who created those ants?

Mike says he might want to abstain from the discussion. He says there is no degree to this. You either do or do not, you don’t try. Trying doesn’t exist.

Mike equates this to how disgusting people can be when they are living alone. If they can’t live cleanly with others, how can they live cleanly when alone?

Everyone decides how much mess they can accept, but if your standard of living causes roaches or rats, that’s on you. You need to fix it, not anyone else.

Nobody cares as long as you fix these things yourself.

This is why Mike has the theory that apartments are treated poorly.

It appears that people complain just to complain. They have no good reason.

The campaign sent out an email push. Torya was surprised with how many people reply with “Please remove me from your list.”

They discuss how people register to vote because after seeing the voter data, Torya has questions about why people are complaining. Despite opting in to the email list, people still complain and Amazon SES acts as though they are being spammed.

Both Mike and Torya prefer letting people know about problems experienced with businesses. They believe that any dishonest complaint will be exposed. Complaining about a poor experience should be allowed and anyone lying should be called out.

The bottomline is people should be adults and handle their own business.

Torya then discusses her irritation with people who bash millenials. She doesn’t like the labels. She gets offended by the labels.