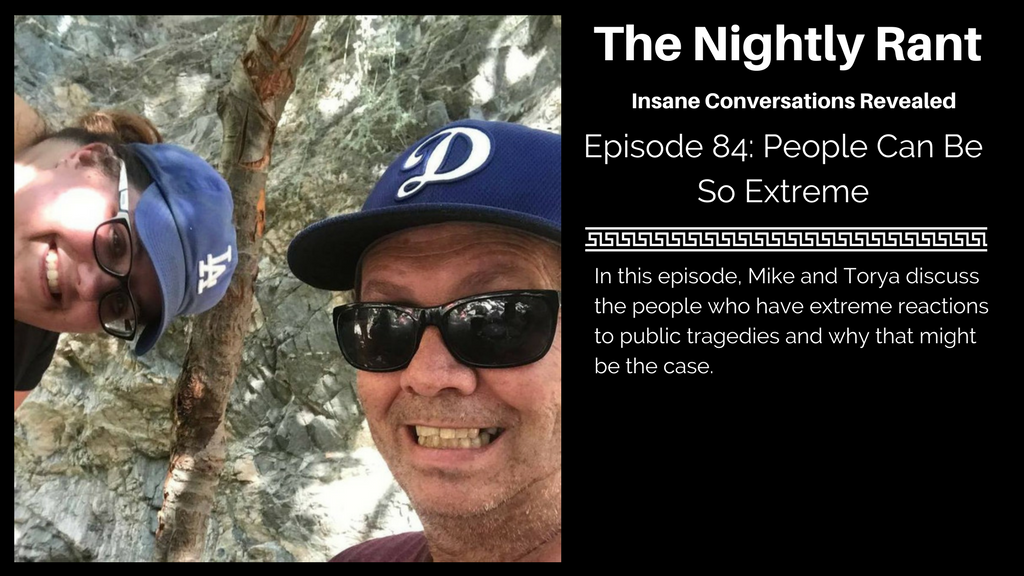 In this episode, Mike and Torya discuss the people who have extreme reactions to public tragedies and why that might be the case.

Listen to The Nightly Rant Episode 84

Mike opens the show discussing the Humboldt Broncos hockey team that was involved in a tragic accident that killed 15 people. People are leaving hockey sticks on their porches as a memorial to the team. This prompts Torya to mention a friend who has been sharing everything related to this tragedy.

Mike realizes that whenever there is a tragedy, there is always that person, not necessarily involved, but at some point had a close friendship with someone involved, and they are always attached to these incidents. This shows that real friendship means something to people.

Apparently the driver involved in the incident did absolutely nothing illegal. The thought of what he is going through is awful. He has to live with this forever.

Mike says he has a hard time relating to losing someone so important in his life. It boggles his mind. Torya agrees.

Mike says he always considers this when he leaves people important to him.

Mike observes that people tend to pick on those in the middle for some reason.

They discuss the need to experience the emotions of your situation.

The Queen of the Zoo enters at the most inopportune moment. She wants attention as usual.

Mike talks about compassion and how people need to think about someone's situation and don't judge them. He also says people should not compare tragedies because they just don't know the real feelings someone is experiencing.