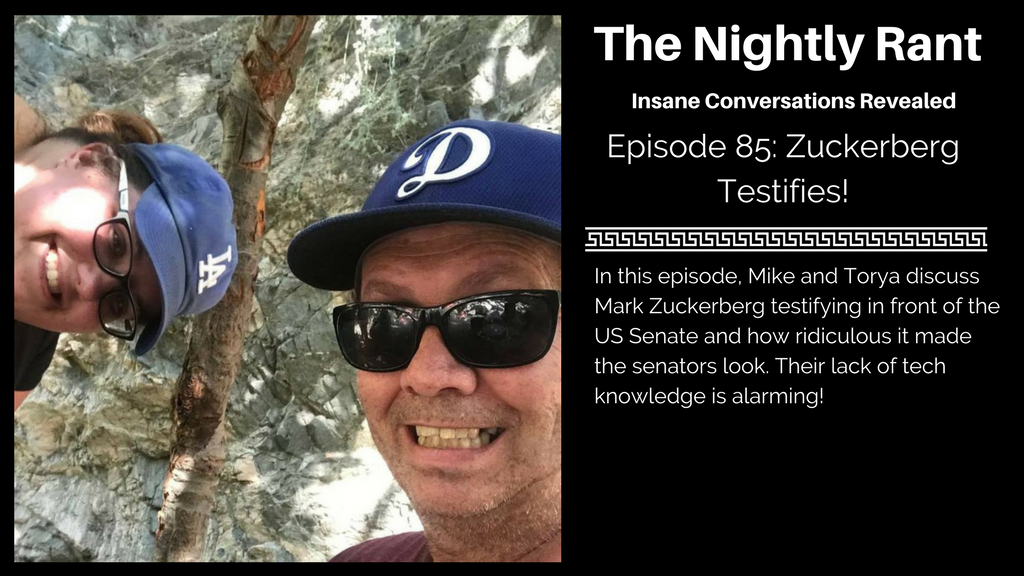 In this episode, Mike and Torya discuss Mark Zuckerberg testifying in front of the US Senate and how ridiculous it made the senators look. Their lack of tech knowledge is alarming!

Listen to The Nightly Rant Episode 85

Mike and Torya talk about Mark Zuckerberg testifying in front of the US Senate. They chuckle about the stupidity of the lawmakers who asked questions that made it clear they have no clue how technology works.

Mike asks Torya what is one thing that every eCommerce site has on it. He lets her know it is Google Analytics and explains that is how Google knows everything you do. It is why they have Google accounts that let you use various services. Torya points out that iPhones log into Facebook at the settings level.

Mike talks about a guy he heard who used Tinder and liked every woman he saw. He got hundreds of messages by doing this. Mike rants about how many apps use the swipe technique Tinder made popular. He also complains that he was one of the first “suckers” to fall for Google's data collecting scheme. They then discuss why one worries about this and the other does not.

Mike suggests they give hockey updates. Torya doesn't seem so thrilled about it. He gives Torya trouble about NOT having a favorite team. He then updates everyone on the score.

Winnipeg Jets, Pittsburgh Penguins and the Vegas Golden Knights all won. Mitchell wants Mike to do a soccer update as well.

Fake Mike Pence was in the Orange County Register.