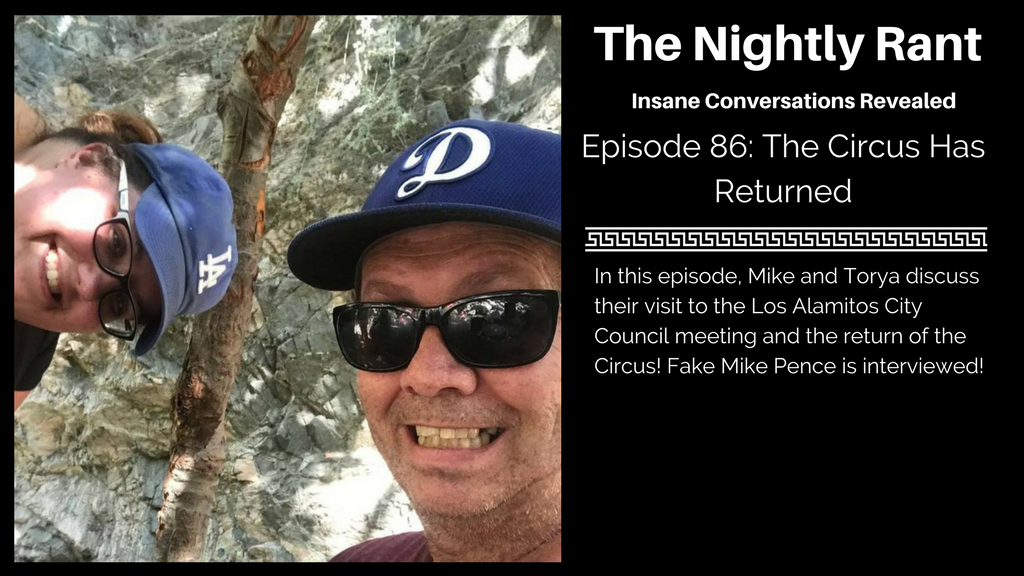 IIn this episode, Mike and Torya discuss their visit to the Los Alamitos City Council meeting and the return of the Circus! Fake Mike Pence is interviewed!

Listen to The Nightly Rant Episode 86

Torya feels the protestors were very off topic. One officer was so concerned something was about to happen that he had his hand on his gun.

Mike, once again, praises the police for their measured response. They did a wonderful job.

Torya explains she went around asking questions. She got some very nice and reasonable responses. There was one woman from Arizona who got in Torya’s face for asking why so many people from Arizona were at the protest. The woman didn’t care to find out Torya’s position, but went off on her anyway. Torya says more people need to approach these things by first asking a simple question in a calm manner.

Mike says Fake Mike Pence is very passionate about his issues. Mike reflects upon releasing his pent up anger on Facebook. He admits to being mean. However, the one time someone didn’t deserve it, Mike made it a point of apologizing to that person face to face. Mike explains that he likes that people are honest with him. It gives him a feeling of trust towards those people.

Torya points out that Fake Mike Pence has these arguments so much that he doesn’t realize he’s met Mike and Torya in the past.

Mike says he sees nothing wrong with being a paid protester if you agree with the cause. Mike sees the difference between him and Fake Mike Pence as the fact that he (Mike) is willing to change his mind while Fake Mike Pence is there like it is a job.

Mike points out that it is very important for the Judicial Branch of the government to be unbiased. He uses the same sex marriage decision as an example.