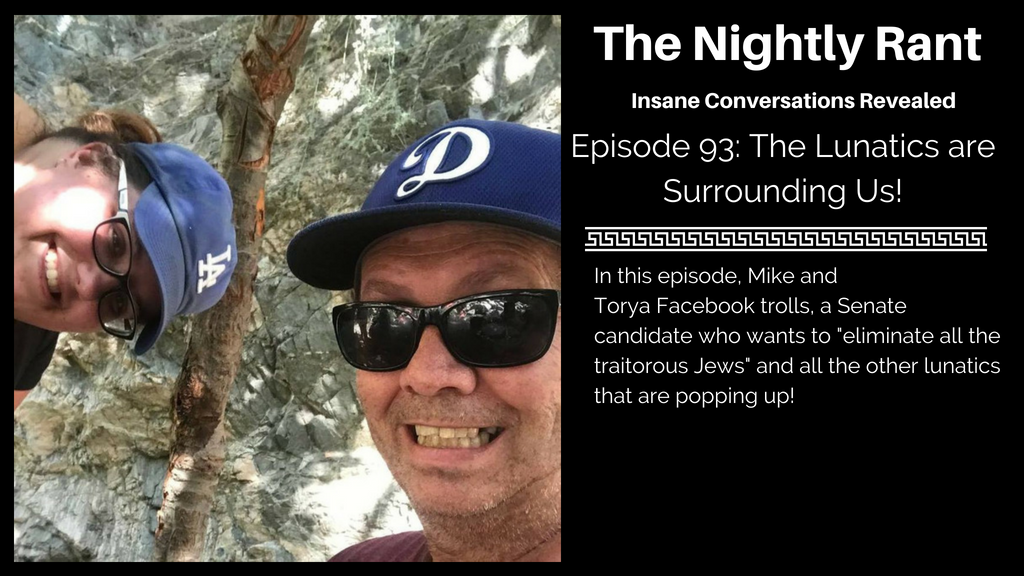 In this episode, Mike and Torya Facebook trolls, a Senate candidate who wants to “eliminate all the traitorous Jews” and all the other lunatics that are popping up!

Listen to The Nightly Rant Episode 93

Torya states that it seems like forever since an episode of The Nightly Rant was recorded. Mike points out that the last one was last week when he was in Austin, Texas. It has been a hectic few days, but they are back at it.

Mike brings up people on Facebook who simply put words in people's mouths and then attempt to defeat the words they put in people's mouths. They try to tell you what you think. As an example he says “No, that has shown not to be the cause of an increase in crime.” They will respond “Then you believe all homeless people are angels without any issues.” Once corrected, the people continue to pivot off their original statement.

Mike says that he gets angry when people do this and ignore his corrections. He doesn't like being ignored. He points out that it doesn't work to further the conversation. He says it is a lot like talking to kids.

As usual,, Pretty Girl interrupts the show to get attention.

People on the Radio

Torya brings up the fact that people on the radio annoyed her. She mentions Debra Mark who was on the John and Ken show substituting for John. This woman saw a post on Facebook from a friend who is very proud of her teenage daughter for hunting a large animal. This woman, Debra Mark, mentioned she was actually thinking of unfriending this person.

Mike points out that after 5 days back home, Yogi is still attached to his hip. It appears Yogi is making sure Mike doesn't leave again.

Torya brings up the California candidate for US Senate who mentioned in his robocall that he was going to eliminate traitorous Jews. They both want to know what is wrong with the guy. Mike points out that the media is most definitely making sure this guy isn't elected by playing snippets of his robocall.